My Lost Poets: A Life in Poetry 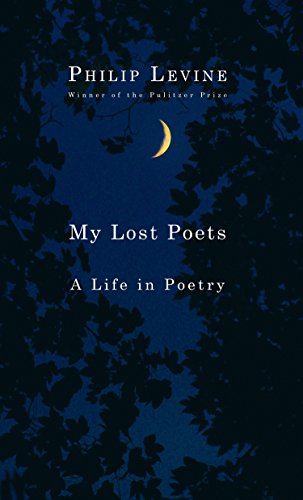 Last books by any writer are always a mixed blessing. Like reading the last chapter of a fine novel, you enjoy its depth and its significance in the writer’s life, but you also dread finishing it.

We are blessed here with two books from Philip Levine (1928–2015), Pulitzer Prize winning poet and U.S. Poet Laureate. My Last Shift: Poems resonates on the poet’s own self-knowledge of age and finality, some of his finest work. My Lost Poets: A Life in Poetry contains ten of Levine’s sharp and reflective essays on the work and life of the poet. He left the book editing tasks to his good friend, poet Edward Hirsch, who does a fine job of presenting the poet’s last best work.

Some of the essays are collected from his many talks and writings, others are original as is the title piece written about the enclave of young poets he began with while a student at Detroit’s Wayne University. From his first efforts as a young boy saying things out loud in the woodsy dark to his discovering poetry in Detroit Public Schools, he was drawn to the act of poetry. “At the time I knew exactly why they thrilled me. I had discovered a voice within myself I’d had no idea had been there, a voice that could speak of all the things I would never have dared to share with anyone, a voice that tried to consider the value of being alive, the sense of what it was to be alive, not so much as Philip Levine or any other Levine or any other Philip, just to be alive.”

When he stumbles upon a poetry reading at Wayne University, he records, “there were living poets in my town, some my own age and at least one younger, and no matter how well or how badly they wrote they were serious about a life in poetry. I was not alone.” Such exuberance at finding kindred spirits is, one hopes, familiar to most of us. Yet here he is recording the characters and the character of this first group of fellow writers some 70 years later.

What Levine does in this personal yet critically wise book is capture the importance of an art as old as the spoken word. And he moves in other pieces through his early apprenticeship and education to poetry and life. It proves great fun and enlightening to watch him discover such greats as Wilfred Owen, Hart Crane, Walt Whitman, William Carlos Williams, and Federico Garcia Lorca. He is refreshingly honest about his own ignorance and his deep bonding with these and other writers.

In “Nobody’s Detroit” he helps us connect with his essential stance as a working-class poet of Detroit. Though this does not define him, his ambivalence expressed toward his home city mark the long appeal of his writing. He records its streets, its people, and the heavy labor and decline that surrounds it. In “Detroit Jazz” he covers the great jazz artists in the small music scenes that lit his path, often including his poems on musicians playing and ultimately exclaiming “Yes, I’m trying to say that music like water is essential to life, for in fact I can’t imagine a life without music.”

In a piece on Sonny Stitt and Gene Ammons, he writes:

“It just gets you
some kind of way,” somebody once said.
The man was talking about Ma Rainey,
but it’s all the same, music with words,
music without words, words alone,
the city streets silently turning
toward the light, the still darkened houses
holding their tongues while a man dances
before them, content to be alone.

Though he continues to write of it, Levine left Detroit in his 20s to travel much of the world, including Spain with an attraction to the Civil War poetry being done there. He attends and teaches at the University of Iowa, then ultimately settles in Fresno, California where he taught writing and poetry most of his life, and he is a good teacher in this book, getting to the heart of a poem and sensing its connections to life.

His own praise for a teacher goes to several fine people, but he finds in poet John Berryman his best mentor in the art of poetry. In “A Day in May” he records the later Berryman who joins him and Thom Gunn for a reading in Los Angeles. Like many tales of poets who had emotional and drinking problems, this shows the night ramblings of he and Berryman at his egoistic worst. But Levine never holds back on treating the whole person or place, including himself.

Philip Levine is an astute and honest writer of real charm in this final prose book treating his life and work. It is a rare and worthy sharing by one of our finest contemporary American poets.