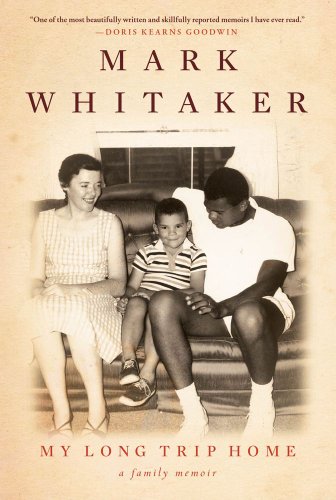 “Perhaps there was something buried in this memoir that I kept missing, something that I kept searching for in vain. It may be buried somewhere . . .”

The best memoirs take off and soar as they take us on a journey through the writer’s life. This memoir by CNN chief Mark Whitaker seemed to taxi on the runway from its beginning on page 1 until its conclusion 367 pages later.

This reader never felt the presence of author Whitaker’s mind or personality in an account that was overly flat and dry: “My mother taught and my father began writing his dissertation and I played with the other faculty brats in the spacious yard outside while my brother grew into a toddler.” The language, in fact, was so dry that I began to wish that this had been prepared as an “As Told to . . .” or “With . . .” version with some energy to it.

It’s difficult to see what major statement about life was intended to be imparted by this work. Mr. Whitaker’s professor father divorced Mr. Whitaker’s mother when Mark was young; thus, he seems to view himself as a unique member of a group that “. . . had grown up without our fathers around and with very little money in the house.” That’s actually quite a large group in our society. Moreover, Mr. Whitaker reminds, again and again, that he wound up at Harvard.

There’s simply far too much here about Mr. Whitaker’s time at Harvard, and the lifelong connections he made there. It seems that wherever Mr. Whitaker goes in the world, he meets people—primarily women—of whom he states, “She had also gone to Harvard.” It becomes a very clubby account—and it’s hard to see why this would be of interest to the general reader, again and again.

“Angry men don’t make good husbands.” In an attempt to create a story of interest, Mr. Whitaker goes on to cast aspersions on his father, who is portrayed as either “a cruel bully or a selfish baby.” Cleophaus Sylvester “Syl” Whitaker is also portrayed as a major alcoholic, although it’s also noted that he only missed teaching three classes in a long and distinguished academic career. (He once entered a rehabilitation center for treatment.)

Syl held numerous impressive teaching and administrative positions at Swarthmore, Rutgers, UCLA (where he was a key assistant to Chancellor Charles E. Young), Princeton, CUNY, and the University of Southern California (from which he retired as professor emeritus of political science and former USC College dean of social sciences at age 60). He was never found asleep in a gutter or under a bridge, so it is hard to see how this squares with Mr. Whitaker’s notion that his father’s life was an “arc of blazing early success fading into self-destruction and financial hardship.”

Perhaps there was something buried in this memoir that I kept missing, something that I kept searching for in vain. It may be buried somewhere in a sentence such as this one, which I found to be a bit too clouded to understand: “It was as if the longer I was separated from my father, the more I lost touch with the outgoing child who had modeled himself after him.”