My Life as a Rat: A Novel 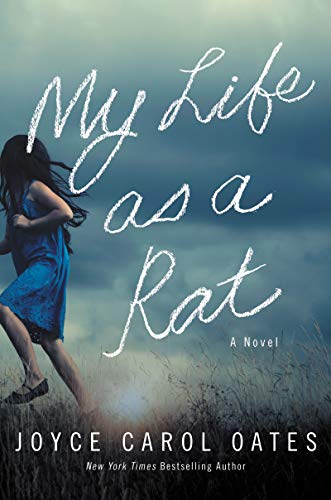 “My Life as a Rat is a quiet, contemplative tour-de-force.”

Acclaimed and esteemed author Joyce Carol Oates tackles toxic masculinity and its impact on one girl's life in her latest novel, My Life as a Rat.

Fierce and unflinching, Oates dissects every aspect of paternalism and male entitlement Including: a father's tight-fisted control over his wife and seven children, two older brothers who learn to answer life's frustrations with violence, the youngest daughter who loses her most-favored status and is exiled from home and family when she accidentally betrays the men of her family, the strangers and family alike who prey upon an innocent girl's burgeoning sexuality, and the men who coerce and manipulate the women in their lives in a self-gratifying pattern of behavior they are forever blind to.

The story follows 12-year-old Violet Rue, the youngest Kerrigan child, and her life as a "rat" after accidentally letting it slip that her two oldest brothers were involved in a racially motivated attack that left a young boy dead. Violet is immediately exiled from her tight-knit Irish clan, first removed from the home by social services, then placed with a distant aunt in another city, and finally, leading her own independent life as an adult always looking over her shoulder, drifting from town to town, fearful of her brother seeking revenge for her betrayal of the family.

Oates' straightforward yet compelling prose draws a picture of a family in which, "Everyone in the Kerrigan house was a captive animal." Violet's mother "did not dare to speak at length. Whatever she said, or did not say, your father would talk over, his voice restless and careening like a bulldozer out of control." And the distant aunt and uncle make Violet observe that "Living with adults you live with the husks of their old, lost lives. Like snakes' husks, or the husks of locusts underfoot."

Although Violet accepts her new identity as a rat—as reflected in the book's title—the novel is more about the impact of toxic masculinity on society as a whole, cultivating racism, violence, and misogyny. Violet's tale is one of a girl whose self-identity is stolen by the insidious effects of male entitlement, to the point where she only exists as Violet the Rat and can barely imagine an existence beyond that label.

After being exiled both physically and emotionally from the family she dearly loves and misses, Violet constantly searches for connection, for someone who might consider loving a rat, granting her the forgiveness she can't gift to herself. It is difficult to watch Violet allow older men take advantage of her body and soul, knowing it’s wrong, but seeing it as just punishment for her "sin" of a childish slip of the tongue. These scenes will resonate with most readers, even if they haven't personally been victims of abuse or coercive relationships, they ring so true:

"In that deep sleep, in which my heart had barely continued to beat, at the very bottom of the marble coffin, I had been protected, safe . . . Mr. Sandman was my friend. No one else was my friend. Aunt Irma staring at me, disbelieving. Uncle Oscar, with repugnance."

Although the book is set in the 1990s, the almost-casual racism and misogyny reflects many of today's concerns but with a distance that makes them more palatable. As we follow Violet over two decades, we cringe at her bad decisions and cheer for her tiny steps toward rebuilding her self-esteem and reclaiming her life.

"I am made to feel light, effervescent. The leaden sensation drains from my limbs. I am most alive at such times. I am hopeful. My vision is almost too sharp. I notice things that would otherwise pass in a blur of distraction . . . Faces of strangers startling and beautiful. Eyes of strangers startling and beautiful. Other days are muffled and blurred and pass as if underwater. Must drag myself through them. Force myself to breathe. Keeping myself alive is the goal. Today, I feel this is possible."

My Life as a Rat is a quiet, contemplative tour-de-force. Violet's story will haunt readers long after they turn the final page.