My Life on the Line: How the NFL Damn Near Killed Me, and Ended Up Saving My Life 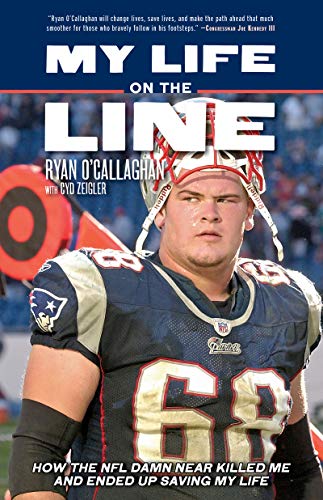 “O’Callaghan has written a gripping and complex examination of the ways in which bigotry and self-hatred walk hand in hand, and the ways in which the snares we set for ourselves are often more dangerous than the ones which others set for us.”

It’s a shame that books like this are still necessary.

David Kopay, a former NFL player, came out of the closet in 1975. In the nearly 45 years since he did so, only six other NFL players or former players have come out as gay, the latest of whom is Ryan O’Callaghan.

In My Life on the Line, O’Callaghan tells his story, and though it ends on a hopeful note, much of it is bleak. It is a book full of painful ironies, one of them being that O’Callaghan rose to prominence and sacrificed his health in a sport he never really liked very much. His passion was not for the game, but for the cover it provided to a young boy frightened by his own sexuality and the reactions it might prompt in others. As he puts it, “If you were associated with the football team, you were straight. Period. No questions asked. Ever.”

Clearly, genetics played a role in O’Callaghan’s journey; at six-foot-six and 300+ pounds, he was practically engineered to play right tackle. Still, it is odd to envision someone who was literally the biggest man on campus spending his high school and college years in dire fear of a three-letter word, while the gay and gay-seeming drama kids and band geeks whom he spurned lived more honestly and courageously than he did.

Throughout high school, college, and his six years in the NFL, O’Callaghan’s closet was the football field, and his time there left him so physically wrecked that, before the age of 30, he was unable to raise his arms above his head or get in a car without using his hands to lift his left leg.

More serious was the psychological toll that all O’Callaghan’s evasions and stratagems wrought, leading to the severe substance abuse into which he drifted to cope with both the physical pain of his multiple injuries and the psychological pain of his choice to remain in the closet. In episode after episode, we see him make choices governed by internalized homophobia, leading him into to a long series of decisions about his career, health, relationships, finances, and future—which are all guided by his fear of being found out, and which represent short-term thinking at its worst.

The last third of the book covers his decision to break his drug habit and to come out of the closet. This process is, in some senses, an anti-climax. As he reveals his secret to friends, family members, fellow players, and even NFL executives, all seem surprised, but none reject him, or even appear terribly discomfited. He is even enlisted to be an ambassador in a resource group for LGBTQ people in the NFL (Again, this is imbued in irony, because the league seems to value him more as a gay spokesperson than it ever did as a player, when he was generally treated as disposable). Yet even as O’Callaghan repeatedly wonders what he was afraid of, he gets plenty of evidence that there are still queer kids—and adults—living in fear on the sports field.

My Life on the Line is not perfect; the prose is sometimes heavy handed, the content occasionally redundant. Still, O’Callaghan has written a gripping and complex examination of the ways in which bigotry and self-hatred walk hand in hand, and the ways in which the snares we set for ourselves are often more dangerous than the ones which others set for us.

It’s a shame that a book like this is still necessary. Thank goodness O’Callaghan wrote it.