My Lady of the Bog 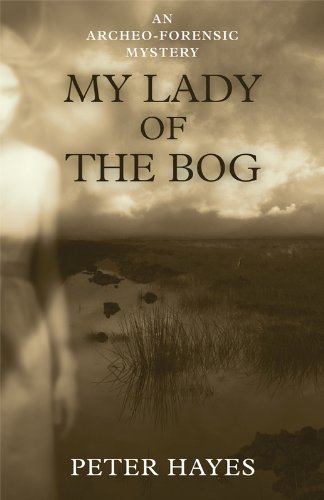 “My Lady of the Bog is a page-turner with a corpse we can fall in love with, runes we should have read, and a sword-hacked scholar in a carpeted study of prim, modern-day London.”

Over the past century, investigators have discovered hundreds of astonishingly well-preserved mummified bodies from the anaerobic environment of peat bogs, one dated as old as 8,000 years.

Some of the “bog bodies” appear to be executed criminals, ritual sacrifices, or murder victims. In My Lady of the Bog author Peter Hayes turns the discovery of a beautiful female cadaver into an enchanting murder mystery, ghost story, and romance.

American anthropologist Xander Donne, working and studying in England, is called to examine a corpse he ultimately dates to medieval times. She has been submerged in the bog with treasure and a silk-wrapped book and has been pinned through her limbs with rune-covered stakes.

The runes are translated only after they’ve already been removed. The message? “Do not remove these stakes. This woman is a witch.” And then bad things start happening.

Donne sneaks off the book for study and learns it is written in Indic and tells the tale of a romance and power struggle in India’s Moghul Empire. What the devil is it doing in a Dorset bog?

This being England, he soon finds himself embroiled with a modern murder, a gorgeous Indian woman of royal descent, and as many twists and turns as a British lane.

This concept is great fun, enlivened by Hayes’ brisk and handsome writing style. The American author has a knack for descriptive metaphors that capture in a phrase what some writers might belabor a paragraph on. He gives helpful background on such subjects as bog bodies, where the heck Dorset is, and what else happened there.

Hayes also draws on his time living in India to give a parallel story, translated from the Indic book, of a power struggle in northwest India. Not to mention a trial in medieval England! This mystery’s scope and inventiveness are impressive.

The novel’s cleverness, however, requires scrambling at the end that throws in everything but the proverbial kitchen sink. How to tie bog body, Moghul intrigue, modern murder, disbelieving cops, and torrid romance together?

That requires a new serial killer, an unlikely coincidence, false confessions, and a moody mother. This reader managed to suspend disbelief and embrace the fantastic and passionate elements of the tale. Stern analysts of the police procedural, though, may protest that Hayes goes a plot twist too far.

Character development is also sketchy in an adventure with a lot of people, a sprinting pace, and quick changes of scene. We scarcely know a key victim.

No matter. My Lady of the Bog is a page-turner with a corpse we can fall in love with, runes we should have read, and a sword-hacked scholar in a carpeted study of prim, modern-day London.