My Kitchen: Real Food From Near And Far (New Voices in Food) 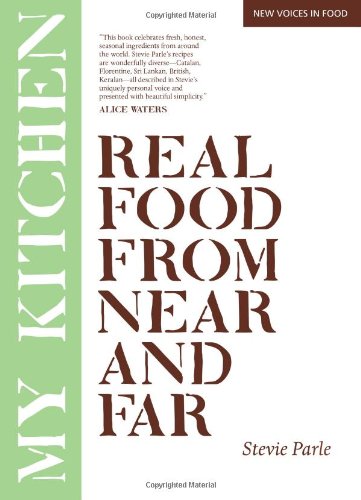 Like his London restaurant, The Dock Kitchen, Stevie Parle’s first cookbook, My Kitchen: Real Food from Near and Far, is unconventional. It is part of the New Voices in Food series from Lyons Press that features up and coming new chefs from around the world.

Stevie Parle, who is in his twenties, has already worked in some of the best kitchens in London as well as The Spotted Pig in New York. He garnered considerable attention for his London pop-up restaurant, Moveable Restaurant, which he launched in 2009 with Joseph Trivelli and then went on to open The Dock Kitchen, modeled on the same supper club format with an ever-changing menu.

Less like a cookbook and more like a random walk through Mr. Parle’s home kitchen over the course of a year, My Kitchen doesn’t offer a slew of recipes. Which is not to say that the book is without merit. On the contrary—what makes this book stand out is the way it covers such a wide variety of seemingly unconnected culinary topics and recipes that manage to both inform and delight. In short, this is one of the most refreshingly quirky cookbooks you are likely to come across all year.

His approach to the book is as fluid as a pop-up restaurant. Mr. Parle has traveled extensively in Sri Lanka, Japan, India, Morocco, Mexico and Italy. His souvenirs are his collection of recipes, some of which he shares with us in My Kitchen. In any given chapter (which follow the months of the year) Mr. Parle may take you to Italy, Japan and back to Italy again, or perhaps Sri Lanka, Italy and then back home to the U.K. focusing on just one or two seasonal ingredients.

Along the way, we are offered some useful cooking tips for techniques like slow cooking or deep-frying for tempura. He also includes culinary ruminations on ingredients that don’t often get much attention, like sardines, anchovies, garlic and okra (I told you the book was unconventional). His essay on umami, a Japanese term for something akin to depth of flavor is positively revelatory and will probably make you think more about flavoring the next time you cook.

The book has the feel of a journal and even includes some pages with lines so you can add your own thoughts or notes. It is a book meant to inspire you and get you thinking about new ways to cook with ordinary ingredients. His recipe for Chana Masala, a chickpea curry, for example, can be made entirely with pantry items (assuming you stock Indian spices) and was a real mood lifter on a cold night at the end of winter.

Everything in this book seems to be offered from the heart. My Kitchen portrays a young man with boundless energy and creativity whose approach to food is honest, authentic, and out of the ordinary. He is quick to attribute recipes and culinary knowledge to others, whether it is explaining how to cut a mango like his grandfather taught him, how to boil an egg like M. F. K. Fisher described in How to Cook a Wolf, or offering us his father’s soda bread recipe. And yes, like all good British cooks, he includes a recipe by Elizabeth David.

Ultimately, this is what makes My Kitchen so endearing. In his young life, Stevie Parle has already learned that cooking is something that is passed from one person to another and one generation to the next.

He is a culinary talent to watch—and we are fortunate he has already begun to share his knowledge with us.