My Italian Bulldozer: A Novel 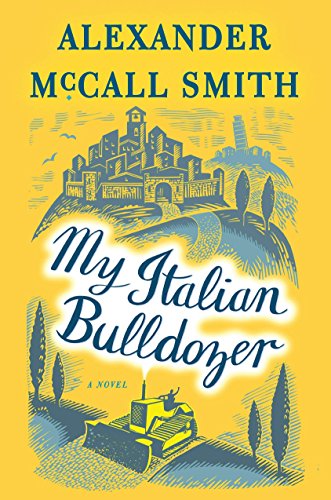 Just from the title of this latest little work by Alexander McCall Smith, you know it is going to be a light-hearted tale about Italy . . . and a bulldozer. But it is also a story about love, of many types and on many levels: reciprocated and unrequited love; love lost and love found; love of food and wine, of the earth, of friends, of the Italian countryside. And it is all sprinkled throughout a delightful tale with a somewhat absurd premise.

One warning: The story begins slowly and does not hit its stride until chapter two. Not to worry: It picks up steam rapidly after that. A second warning: Don’t stop with chapter two, or you may never want to visit Italy, and (as you’ll see beginning in chapter three), that would be a shame.

Food writer Paul Stuart is working through the trauma of Becky, his lover of four years, having deserted him for her muscular personal trainer. At the suggestion of his editor, Gloria, he travels to the village of Montalcino in Tuscany to re-energize and finish his book on Tuscan cuisine. Upon his arrival he attempts to rent a car, but in a bizarre series of events too complicated to describe briefly, he instead ends up in jail, sharing a cell with an apparently deranged criminal. He eventually rents the only vehicle available on that holiday weekend, a bulldozer.

Although Paul is somewhat skeptical about this unusual form of transportation, it turns out there are certain advantages to traveling to Montalcino on a bulldozer: He is treated with more courtesy on the road than Italians usually afford those who hold up traffic; he has a terrific view of the countryside; and on arrival he is an immediate celebrity. He makes friends with local residents who admire his excellent command of Italian and appreciation for the local food and wines.

As the story proceeds, Paul meets Anna, an attractive, vivacious American with whom he immediately falls in love, only to discover later that she is already spoken for (but not in the way one would expect). Things become sticky when both Becky and Gloria show up in Montalcino, and Paul tries mightily to keep the women apart. It does not end well, but matters resolve themselves satisfactorily.

My Italian Bulldozer contains interesting observations on Italian wines (Did you know there were “hundreds of different sorts of Chianti”?), cheeses (parmesan doesn’t have to taste like “powdered cardboard”), and cuisine, particularly mushrooms (“so undemanding, so rewarding”).

But it also has a healthy dollop of McCall Smith’s usual dry humor and homespun philosophy, his reflections on life: Is it morally right to move a sign designating a public parking lot in order to avoid paying the fee? (“Parking regulations might seem petty,” but they are “a clause in the social contract without which, as Hobbes had warned, life would be nasty, brutish, and short.”) Are some property boundary lines drawn unfairly, or is there “always somebody on the other side” who will suffer or prosper if it is redrawn? What does it mean to be in love? What does it feel like? (Like “hearing loud chords of Bach resonating in some great cathedral,” among other colorful similes.)

And this is one important reason his readers love McCall Smith: He presents us with gentle stories that ask profound questions and leave us not with all the answers, but with a smile on our face and a lot more to think about than when we began.

No rush. You’re on a bulldozer. Take your time.