My Heart and Other Black Holes 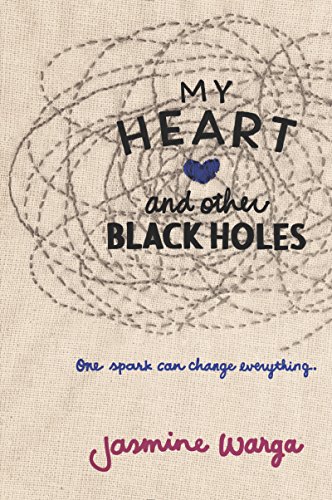 My Heart and Other Black Holes by Jasmine Warga is a beautifully written, stand-out debut in the growing subgenre of contemporary realistic YA fiction about young characters dealing with the aftermath of, or contemplating, suicide.

Sixteen-year-old Aysel (pronounced Uh-ZELLE) lives in a small town in Kentucky with her mother, stepfather, and half-siblings. Of Turkish heritage, her biological father was convicted of murdering a local Olympic hopeful and sent to prison when she was a baby. Aysel, who looks just like her father, carries his infamy heavily and fears that she’s inherited his mental illness. This “black slug” in her middle robs her of all happiness, pleasure, or emotion. To add to her distress, she’s bullied at school and distant with her family.

Contemplating suicide and chatting on a website called “Unsmooth Transitions,” she finds “FrozenRobot,” a 17-year-old young man from a nearby town who feels as she does. They agree to be suicide partners and meet up. His real name is Roman, and he wants to kill himself on April 7th, the anniversary of his sister’s drowning. It’s a few weeks away and the two begin planning to leap together from a high river bluff.

If it seems like YA novels with characters who are affected by or actively considering suicide are coming thick and fast, they are. Suicide is a subject that a surprising number of young adults, 17% according to the latest CDC study, have considered in the past year. If they haven’t, their friends have—or worse, a family member, friend, or acquaintance attempted or completed it. Throw in suicide’s diehard stigma, and it’s all the more compelling to young readers.

Perhaps predictably, Aysel starts to fall for Roman, and their budding relationship fuels her second thoughts. She decides to at least attempt to deal with some of her family relationship issues before she dies. After a camping trip during Aysel’s quest to find her father, Aysel and Roman kiss and spend the night sleeping next to one another.

As Aysel regains her footing and her desire to live, Roman doesn’t, and he proceeds on his own. The story ends on an up note despite its high potential for tragedy.

Aysel is a sympathetic and credible first-person narrator who articulately leads readers through this rocky terrain—an honest, accurate and sensitive exploration of the subject.

A depressed and suicidal character can easily come off as unlikable. Aysel may seem a little whiny at first, and occasionally goes on at such length about her thoughts and reasoning that the reader is tempted to skip ahead.

But the premise is compelling and fresh, and the writing strong enough to keep readers hooked until we fully understand the characters and their issues—and root for Aysel and Roman to survive and thrive.