My First Hundred Years in Show Business: A Memoir 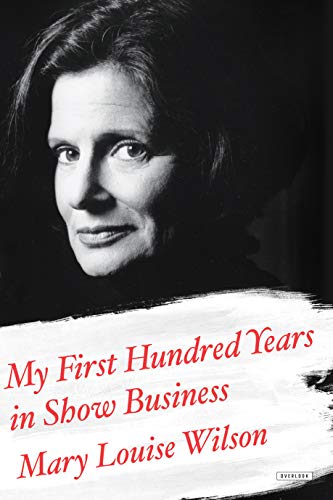 Every once upon a time, a memoir comes along that reads as if the reader had been lucky enough to attend a swank Manhattan dinner party and be seated next to the most charming sort of company—an accomplished artist who speaks of her experience in the theater with a mixture of charisma, wit, and brevity that makes the table candles seem to melt much too quickly.

My First Hundred Years in Show Business, actress Mary Louise Wilson’s (best known for her Tony Award winning role as Big Edie in the Broadway musical Grey Gardens) winning new memoir is just such a book, one in which the New York City that is inhabited by Wilson and her theatrical colleagues is like that of a Jean Arthur movie, with mink coats falling on the heads of passing secretaries.

Among the book’s many joys is the language contained within the covers, the lovely way the words are pasted onto the page. And the knowledge that, unlike so many other memoirs purporting to tell the story of celebrities’ lives, this one was actually written by its subject.

The reader learns of Ms. Wilson’s childhood, first in Connecticut and then New Orleans, which, while not idyllic, seemed pretty damn good (“My mother’s mother was an Anglophile who worshipped the King of England and the little princesses, Elizabeth and Margaret Rose, who called the Queen ‘Mummy.’ Consequently, our mother instructed us to call her ‘Mummy.’”), and, in the reading of it, the reader hears Wilson’s own voice telling the tale.

The same holds through the rest of the book. It is written as she speaks, in the authoritative, speedy method of delivery that is her hallmark. And the reader can also hear the palpable joy with which she first discovered Manhattan and began lay down her theatrical roots:

“I fell in love with the Village, the funky bars, the scruffy poets and actors. It brought out the beatnik in me. I moved into an apartment in a tenement on Barrow Street, around the corner from the Circle, for $90 a month. I had two roommates. One worked for Murray’s Earth Shoes making plaster casts of feet which she brought home; tiny, twisted feet; beautiful feet; huge feet with hairs sprouting from the toes which we used for doorstops and bookends. We had orange burlap curtains and our chairs and tables were found on the street.”

Much of the book is dedicated to Full Gallop, the hit play, cowritten by Mary Louise Wilson and her writer friend Mark Hampton (not, as she points out more than once, the famous society decorator of the same name). Gallop’s rather arduous trek from clever idea to successful production weaves in and out of the narrative from start to finish. And its subject matter, Vogue-editor-turned-fashion-doyenne-turned-museum-curator Diana Vreeland, gives the book extra punch, as Wilson is wise enough to pick a few choice barbs from Vreeland’s own memoir, D.V., and sprinkle them in her own text.

And so the reader is treated to such Vreeland-isms as:

Wilson does not stint on the details of the process involved in developing a new work for the theater. It’s all here, from the fundraising and the early readings resulting in multiple rewrites to the various versions of the script and the expected breakdown in the writing partner’s friendship and their ability to work together—a process that Wilson always saw as the heart of the book:

“I didn’t intend to write this book. I started out to write about the eight-year journey of getting Full Gallop to the stage. A sort of primer for people who wanted to do their own one person shows. Naturally, I had to include background, how I came to write the play and so on, as circumspect and amusing as I could make it, because my life was not the main topic. Halfway through I showed what I had to a few close friends, each of who shortly returned it with glazed eyes and polite murmurs. I was shocked by their reticence. I grabbed their lapels and demanded to know what they thought. ‘You aren’t in it!’ they yelped. ‘We want to know about you!’ ‘This doesn’t sound like you.’ I didn’t get it. I couldn’t make this about me, I’m not well known, I didn’t have a glittering career studded with affairs and celebrities. Besides, I didn’t want to write about me, whoever that is.”

Because Wilson’s friends were smart enough to point out the obvious, and because she was shrewd enough to listen, My First Hundred Years in Show Business is both the primer it was originally intended to be and a warm-hearted, humorous look at the life of a working actor.

Even Meryl Streep turns up for a brief anecdote about a production of Alice in Wonderland at the Public Theater, staged in the days in which she was still notable for her extremely long golden hair.

There’s backstage business as well, as Wilson recounts her many jobs. Why was comedienne Judy Holliday so standoffish when she and Mary Louise Wilson worked together? How did the actress playing Miss Mazeppa happen to die during the revival of Gypsy in which Wilson played stripper Tessie Tura? Why does Wilson refuse to share a dressing room (“I opt for either a private or a ward. No semiprivates.”)? And why the hell did Wilson choose to appear on such a clunker of a TV sitcom as One Day at a Time, even for a single season?

All are answered in these pages, as are all the questions that young actors might have about such vital topics as hair and makeup, unemployment, selecting housing and dining companions while out on the road touring a show, and keeping a pet cat alive while out on that tour.

At the end of the book, Wilson charmingly states: “I like to think of myself as a proud member of the Character Actors’ Club whose names may not be familiar to the general public. Their faces may be familiar from television appearances, but not their names.”

It is this particular conceit that gives Hundred Years its punch.

While we’ve all had our fill of celebrity memoirs in which careers seem to be made up of parties, gowns, and multiple marriages, Wilson’s memoir gives us a look at a life spent in the theater, in good parts and bad, good productions and bad—all capped by a superb performance in a superb show, Grey Gardens, one that was rewarded with a well-deserved Tony Award.

Broadway wonks will cherish Hundred Years. Others, for whom theater, like opera and poetry, is seen as a too-refined art form, may approach the book with less interest. But that in no way lessens the work or detracts from the entertaining, enlightening success that it is.