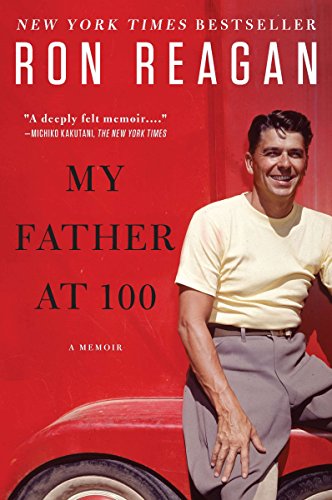 It all started with a conversation between a son and his mother. Mom mentioned that “Daddy” would have been 100 on his next birthday. These ruminations are not unusual coming from a surviving spouse, but in this case, the survivor is Nancy Reagan. The observation launched an idea for son Ron to pen a tribute to his dad, former President Ronald Reagan, aptly entitled: My Father at 100.

At first, son Ron (referred to as such throughout this discussion) was hesitant, saying that examining his father’s life felt like “rifling his drawers when he was out to dinner.” Furthermore, “oceans of ink” have been used by other biographers. He is somewhat apologetic, admitting that this is his first attempt at book-length writing, but he has no need to be humble. What shines through is writing from the heart. He seeks—as he did his whole life—to understand his father who was both a loving parent and at times, an enigma.

The book begins before the beginning, in the days when the O’Reagans of Doolis made the decision to immigrate to the U.S. after enduring near starvation during Ireland’s numerous crop failures and resultant potato famines. Michael O’Reagan’s choice, according to Ron, was the biggest decision of his life. Nor did he know that he “ would create ripples extending across distance and time that would change the path of history more than a century later.”

Conditions in New York forced the family to the Midwest and into a more rural and agricultural life. Frugality enabled the family to thrive, if modestly. Ron devotes a considerable amount of his book to the early origins of the American Reagan Family. Suffice it to say, this was not a family of privilege with huge inheritances passed from one generation to the next.

Michael O’Reagan’s son, John (Jack) married Nelle, who gave birth to Ronald in an apartment above a bakery in Tampico, Illinois. Theirs was a kind of itinerant life, with Jack frequently being out of work and given to bouts of drinking. Still Ronald Reagan made his way through high school playing football and spending his summers working as a lifeguard at the town beach. In this capacity, he carved 77 notches into a log—each signifying a “save” from the roiling currents of the Rock River.

Later, we encounter a football star at Eureka College who is capable of bring rows of cheering fans out of the bleachers. Reagan’s optimism is evident in a statement made to friends as they neared graduation. He predicted that he would be earning huge sums of money within a short time. The statement proved prophetic. Despite some enlightening setbacks, he did land many significant roles in film and television, as well as the presidency of the Screen Actors’ Guild. He later served as governor of California and President of the United States.

Many years later, son Ron wandered through Tampico, Dixon, and other Illinois towns. He concludes that his father’s family was one among many of “middling means.” Theirs was a “different form of abundance.” Ron juxtaposes other events happening in the world as he uncovers the layers of his own family’s history. This can be difficult to do, but actually, it comes across as illustrative and helpful. The former president’s life spanned days of horse and buggy transportation all the way to Star Wars.

There is an emphasis on the early years and family life, offered in an endearing voice from the unique perspective of a son. There is no shortage of father/son tension whether matching wits over some political issue. (The author describes himself as “a poor candidate for membership in the Young Republicans.”) or facing off in the swimming lanes of the family pool. There is sometimes confusing digression as he toggles between his research adventures and his richly described findings. At times, he gives in to wordiness, but taken as a whole, it is a very uplifting and well-written memoir.

Son Ron describes his father as having a “preternatural talent for excising unpleasantness from his picture of reality—or replacing reality altogether with a more uplifting version.” Could this be what enabled President Reagan to collaborate with Gorbachev to end the Cold War? This book is at once funny and tender, factual and honest. Ron makes no bones about this “bicameral character” who is his father, nor does he skimp in any way conveying his love or devotion to him.

Description of the assassination attempt on President Reagan in 1981 is heart wrenching. “Bleeding to death with a bullet in his chest and he’s still doing shtick” (i.e. joking with surgeon Joseph Giordano that he hoped he was a Republican.) Equally touching are descriptions of the later years when Alzheimer’s Disease won out over the grit and determination of his father’s sunny and indomitable spirit. Describing his diagnosis, President Reagan penned a letter in his own hand—complete with scratch outs—which circulated widely in the media. This deed reflects a certain grace and courage which son Ron hopes he could muster if the time ever came.

The book closes with this sentence: “The great storyteller has gone home, but the story lives on.” Ron Reagan has indeed created an enduring tribute.