My Family Table: A Passionate Plea for Home Cooking 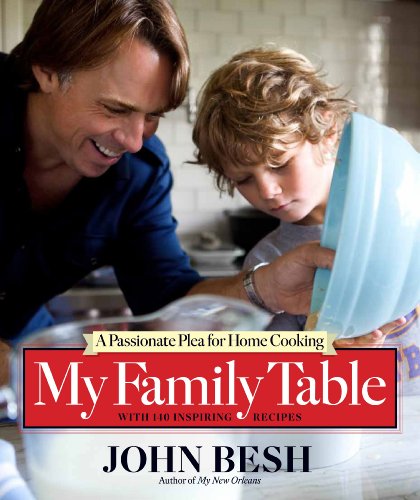 John Besh doesn’t mince words. Making a “passionate plea” in his introduction to My Family Table, he writes of his alarm at the “terrifying wasteland of food options” sprawling between home kitchen stoves and restaurants. Bemoaning high-salt, high-sugar packaged foods, drugged-up meat, and pesticide-laden produce, he calls fast-food options “the devil’s work.”

And, he says (while acknowledging that he is part of the problem): “I worry that the more cooking becomes entertainment and a spectator sport (instead of a family activity) and the more we fetishize celebrity chefs, the awful result is that we discourage folks from even setting foot in their kitchens. More and more, I’m concerned that by glamorizing chefdom, we turn off the very thing we seek to promote: getting people excited about cooking dinner.”

Does this book help to turn that around? Well, at least somewhat. Despite Mr. Besh’s attempts to gin up the excitement, his book may not strike his audience as thoroughly useful for everyday cooking.

Depending, of course, on who’s in that audience. This cookbook, like many today, leaves this reviewer wondering exactly what readers were the target.

Novice cooks? The book isn’t quite basic enough in most of the recipes for today’s novices—who, in an admittedly grand generalization, are truly completely new to the kitchen, lacking even the basic understanding earlier generations would get from watching mothers and grandmothers cook.

Self-professed foodies? These tend to be, in another grand generalization, either people who think they “know food” based only on much experience eating out, or people who take their cooking and ingredients very, very seriously, for whom this books would strike the right philosophical notes but be far too basic.

Because, at their heart, these recipes are pretty basic comfort food, sometimes with a flavor twist. They do make good food, and, if a home cook is able to practice one of the methods Mr. Besh preaches—cooking something big for Sunday dinner (pork roast, roasted chicken, a big ham or chuck roast), then using the leftovers for weeknight suppers—they will ease the nightly cooking burden somewhat. Cooks who can’t, however, may find many of the recipes, which rely on previously prepared ingredients, frustrating and less useful.

Not that the whole book follows that method; other chapters include “dinner from a cast-iron pot,” with such recipes as braised brisket and coq au vin. Here again, though, one of the recipes that looks appealing and relatively quick—pork and sausage jambalaya—relies on cooked pork shoulder from the previous chapter.

And not all of the recipes are about getting supper on the table; other chapters include breakfast, seafood, “barbecue wisdom,” classics including fried chicken, “jazz brunch,” holiday recipes, and desserts. Recipes run the gamut from fried eggs to an entire smoked suckling pig.

As do many of the recipes throughout the book, desserts stick to Southern standards, such as chess pie, lemon icebox pie, rice pudding, blueberry cobbler, and hummingbird cake topped with a seriously rich icing (1 pound of butter and a half-pound of cream cheese). A tested blackberry cheesecake recipe, in which a plain cheesecake layer covers a layer made purple with pureed berries, offers an example of one recipe that seems geared neither toward brand-new cooks nor toward experienced ones: the recipe is quite basic, despite the slight difference of having two layers of cheesecake, but fails to tell a novice baker how to tell when the cheesecake is done, saying simply “bake one hour, until the topping is set. (Additionally, the photo doesn’t match the recipe; it appears to have another layer on top, like a separate sour cream or whipped cream layer—but this is not noted in the recipe.)

Mr. Besh provides a list early in the book of essential pantry ingredients, with a caveat at the beginning about not worrying too much about ingredients or complicated techniques. It’s an interesting, seemingly somewhat quirky list, and not all are easily bought; still, Mr. Besh provides good reasons for the inclusion of each item. Most are store-bought, but a few, such as chicken stock and a cherry tomato sauce, refer to recipes. (One complaint: for such recipes as that tomato sauce, Mr. Besh talks about enjoying both freezing and canning the recipe—but fails to give instructions on canning.) An ingredient he leaves out, but uses repeatedly, is five-spice powder, one of the flavor twists that elevates many of the recipes.

For all his professed ease with cooks who don’t worry about ingredients too much, readers may wonder how much Mr. Besh means it, when he emphasizes organic ingredients, points out the provenance of many, and notes that he raises his own beef. Not everyone has means or access to do any such thing, of course. Nor does everyone have the lovely photo settings on the bayou, the photogenically mussed children, or the time to do all Mr. Besh recommends—the book may leave many cooks wondering how to live up to the standards set here.

But for cooks who understand the very basics of the kitchen, and those who need a reminder of how to cook both basic and somewhat more complex recipes (mostly Southern but wandering through some far-flung spots such as Asia and Germany), My Family Table may offer just the right back-to-basics preaching combined with chef-kissed basic recipes, such as tomato soup and grilled cheese sandwiches—prepared with homemade cherry tomato sauce and a touch of sambal chili paste for the soup, and sandwiches made with pecan-baked ham.