My Brother My Sister: Story of a Transformation 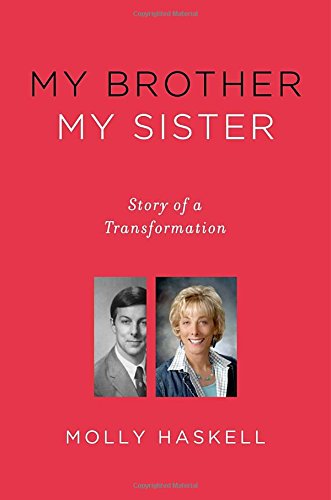 I have two brothers. I cannot imagine what it would be like if one of them told me what Molly Haskell’s brother told her.

In My Brother My Sister: Story of a Transformation Molly Haskell relates how her brother Chevey became her sister Ellen.

Molly Haskell is an American feminist, author, and film critic. In her latest book she takes on a difficult and very personal subject in her usual straightforward manner. At first, her brother insisted: “. . . promise me one thing. You won’t write about this.”

Fortunately, for those who read this book, Haskell’s brother changed his mind. And what we get in return is a sensitive, funny, difficult, and insightful book.

[Note: In the beginning of this review I will refer to Chevey using male pronouns. Later, the pronouns will change to the feminine. Pronouns are important to transgender people. Most of us get it wrong or stumble or just plain refuse to use the appropriate one. There are many reasons for this, not the least of which is disrespect. As Chevey transitions, so will the pronouns in this review.]

Chevey told his sister and her husband during dinner in October 2005, “I have what’s known as gender dysphoria. For as long as I can remember, I’ve felt I should have been born female. And now I’m going to become one.”

Not the usual pre or post dinner conversation topic.

Still this is more than a book about one person’s personal struggle with gender identity. Ms. Haskell looks beyond that part and delves into how the family responds to the news. Chevey was married when he made the announcement to his sister. That’s when she learned that his wife (and his previous wife) had known for years about his struggle.

This story sweeps through contrasting emotions of shock, surprise, fear, embarrassment, love, curiosity, ambivalence, and acceptance. Ms. Haskell tells it with humor, sensitivity, and a soupçon of angst. She manages to relay her struggle to understand her sibling’s transition without sensationalizing the process or rendering it mundane.

Ms. Haskell was a tomboy, which she identified as a Peter Pan like creature, androgynous, “. . . with all the advantages of boyhood, none of the restraints of girlhood. I no more wanted a penis than I wanted any other sign of sexual development (breasts definitely included.” She considers her experience as she works through her feelings about her brother’s transition.

That resonated with me. Many women were tomboys or liked “guy” things. And there are men that are comfortable with their “feminine” side. But that is not comparable to the agony experienced by transgender persons.

Ms. Haskell’s brother started the process in his late 50s. He always knew he did not fit the life he was expected to live. He identified with women, understood women and believed he was a woman. “It’s not about sex . . . it’s about identity.” Chevey told his sister. And that is the heart of this story.

Gender dysphoria is one of the most difficult concepts to wrap your head around. For most of us it is difficult to imagine let alone accept the idea of a man or woman metamorphosing into the opposite gender. It’s a foreign concept to most people.

This is where Ms. Haskell’s skill as a writer comes to the fore. She talks about new and old friends, relatives and acquaintances involved, directly and indirectly, in her sibling’s transition.

The experiences involving her brother’s former wives present a particularly poignant aspect of the story. Both knew about Chevey’s lifelong struggle; he told each before the marriage. His second wife, Eleanor, was angry and hurt to learn her marriage was over and there was nothing she could do about it.

The transition process, something usually overlooked or ignored in other books, provides insight into the surgical and cosmetic procedures Ms. Haskell’s brother endured to achieve his goal. She pulls no punches in these descriptions and they are not for the squeamish.

Plus, anyone who believes this is a casual decision needs to read Haskell’s recitation of the sexual reassignment protocol: facial reconstruction surgery, hormone treatments, psychological evaluations, electrolysis and “presenting” as the opposite gender for a year before the final surgeries can take place. That’s right—there are multiple surgeries.

Now known as Ellen Clark Hampton, the transition seems easier than that experienced by most transgender persons. As a successful financial planner, Ellen had the financial wherewithal to arrange all the necessary surgeries that allowed her to fulfill the dream. This is definitely not the norm.

Most transgender persons are unable to afford the cost of multiple surgeries, hormones and therapy. They do the best they can with limited resources and the results are, therefore, not as complete. Some estimates place the cost for male to female surgical reassignment in the range of $7,000 to $24,000. The cost for female to male surgical reassignment can exceed $50,000.

The financial costs are just part of these scenarios. Many transgender people go through the transition process alone. They have no support system. Ellen Hampton was more fortunate. She has a supportive family and network of friends. This allowed her to integrate seamlessly into a new community.

In reading Molly Haskell’s book however, there were times when Ellen came across as less than sensitive to the effect her announcement and transition had on the people in her life.

She was happy but did not appear to appreciate the toll it took on her family, her spouse and her stepchildren. At such times, Ellen comes across as selfish and self-centered. She even seems surprised that everyone is not overjoyed with her decision. But, perhaps that is the mental and emotional strength required to undergo and endure such a radical transformation.

Even though Ellen had the financial resources to pull it all together and, if the cover photo is any indication, achieved a remarkable result, she constantly wondered when that one little kid would ask, “Why is that man wearing a dress?”

That scene finally plays out when a little girl asked, “Are you a man wearing lipstick?” Ellen responded, “No, I’m a woman, but I used to be a man.” The little girl went off to look at something else, and her mother commented that Ellen had handled the situation well.

Through it all, Molly Haskell deals with her own life while her sister is dealing with hers. And that’s an important part of this book. It is more than the usual book about a transgender person.

Molly Haskell’s life went on. She continued to have lunch with friends, go on walks with her girlfriends, and care for her ailing husband.

It is often said that every true story ends with someone dying. And that happens here. It is a somber ending to a quiet, sensitive and, at times, funny book. Molly Haskell shares an intimate look at her own and her sister’s lives, relationships, struggles, and triumphs—and she accomplishes the task in her own style.

The rest of us are better off for being allowed to eavesdrop.