My Body Created a Human: A Love Story 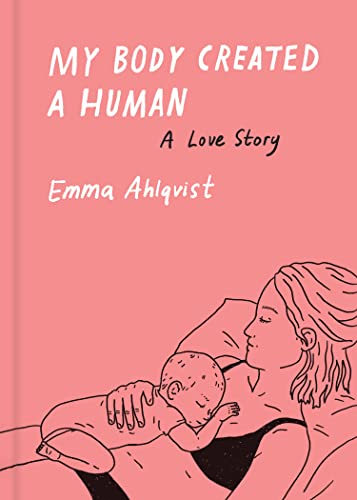 In stark black and white drawings, Emma Ahlqvist chronicles her first year as a new mom. The first section focuses on her pregnancy, the changes in her body and how she sees herself and other women:

“People mostly complain about how hard it is to have children.

Can someone please talk about the good bits?”

Ahlqvist does just that, though the inevitable exhaustion is also shared. Her joy in her new baby is thoroughly described—even his pooping is something she celebrates. These “good bits” seep into how she sees others:

“Somehow, my resting bitch face doesn’t work as well now that I have a baby. But it turns out I actually don’t hate making small talk with strangers when I can talk about you.”

The art that accompanies this text belies the words: the “resting bitch face” looks pretty scary, not at all inviting conversation, despite the smiling infant in the front carrier.

A note here about the art. It elevates the book from being a self-indulgent mommy diary, making the predictable parts more accessible. But its effectiveness stops there. Rather than deepening our sense of Ahlqvist and her world, the art throughout is claustrophobic. There are few settings, few chances to see a wider world. The reader sees a lot of Ahlqvist’s naked body and the changes it undergoes, but faces are mostly impassive or smiling blandly. There is not much personality evoked in the drawings, perhaps because the black and white palette, without any softer grays, feels so harsh. But other illustrators using this style, such as Marjane Satrapi (Persepolis) manage to convey emotions and distinct personalities within these same limitations. This could be Ahlqvist’s intention, however, to visually convey the closed-in isolation she felt as a new mom:

“I feel alone, and I am angry at individualism for making me think it was important to pursue my career at the cost of a community.

I’m struggling to have a social life and be a parent at the same time.”

Whatever the reasoning, the effect is that the art often works against the text, feeling not so much a celebration of new life as a dirge, especially as Ahlqvist worries about climate change and the world she’s leaving behind for her child. The text itself is certainly honest and direct, but there are no interesting insights, no “aha” moments, no captivating humor, nothing to make this a distinctive voice, a particular experience. Instead if feels generalized, almost bland, again perhaps on purpose. Ahlqvist tells us directly why she wrote the book:

“I never thought I would make a book about having a baby, but when I became a mom it felt like an important thing to do. Motherhood as a subject has opened up to me, and I love exploring it in my art.”

Motherhood doesn’t particularly feel “explored” here. Instead it feels “captioned.” Perhaps in this age of Instagram, that’s to be expected. For those who want quickly digested, bite-sized moments in pregnancy and motherhood, this will be a satisfying read. Others will need to search elsewhere.