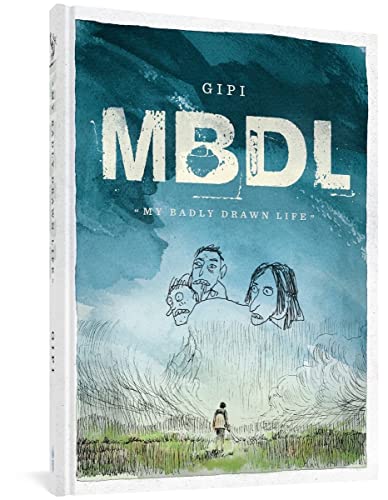 “a portrait of a psyche, of the jumbled mess that lives in our heads . . . Reading these pages is like being invited into someone’s private dream journal.”

Gipi, also known as Gianni Pacinotti, throws us into a life that’s full of anxiety, depression, and fears. The narrator jumps across time in a series of memories about scary men in the bedroom at night, doctors and their seemingly senseless questions, pirates, and monsters. This is a story that’s more a portrait of a psyche, of the jumbled mess that lives in our heads, than a clear narrative with a conventional beginning, middle, and end. A typical sequence is the one where he describes getting high as a teenager:

“I’m sure you know what vapocoolant is—oh, you don’t! It’s a topical anesthetic—used in sports, for minor injuries. I used to huff it. For instance, here’s how Dorelli and I used to do it: We’d squeeze it onto our sweater sleeves (we were always in sweaters, so I assume vapocoolant was a winter sport). And we’d suck on the sleeve with all its juice. The effect, given the limits imposed by drawing was basically this—

For about two seconds, I’d say. Then suddenly this.

Encounters with doctors and dentists are the backbone of the story. Something is wrong, but it’s not clear what:

“How long have I had this ailment? I can’t remember anymore. I find myself thinking it has always been there. But that’s not true.”

The suggestion that there’s a psychological trauma along with the physical one builds over the pages:

“The boy died in bed. He died of fear. He’s cold. He’s not moving. That’s what happens when you’re dead—right? I say he’s dead.

What he came for would be remembered by the boy’s family as ‘attempted sexual assault.’ ‘Attempted’ is the word. Because the boy’s sister is strong and brave and she fights. And wins.

Too bad the boy, in the other bed, is already dead.”

The boy grows into a man who carries those scars—and others. Drawing becomes a way to control the monsters, the nightmares. Reading these pages is like being invited into someone’s private dream journal, all their worst fears vividly described. It’s not a life badly drawn, but the bad things drawn out of the life.

The medical thread continues, happily with a real diagnosis and a resolution. Near the end of the book there’s a reunion of the old high school friends, a kind of coming full circle.

So out of all the angst, a sense of peace wells up, visualized in the final pages by the healing power of moving one’s body through water: “I’m learning to swim.” The mostly blank pages, punctuated by the body stroking through the surface, provides a visual relief, a calm of white, after the pages of dark, intense line work. It’s a fitting way to show the emotional, psychological journey the writer has taken—and us along with him.