The Museum: A Short History of Crisis and Resilience 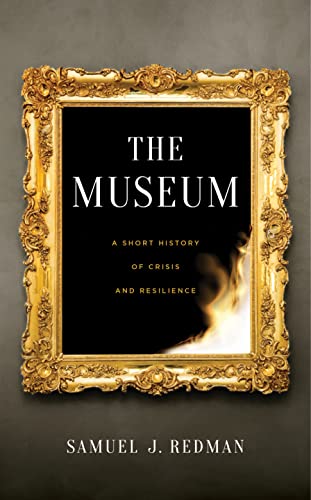 “The Museum takes the reader behind the displays that present the public face of culture and science, to show how they have changed and will have to change to not just survive but to have relevancy in our age.”

“Beset by challenges ranging from pandemic and war to fire and economic uncertainty,” Samuel J. Redman writes, each museum “responded differently to the challenges at hand.” “Museum directors,” also sought ways to emerge stronger.” The Museum is their history.

“Outside voices and important criticism have further prompted vital changes.” Change comes in conflict with museums’ traditional ways of displaying the traditional! These problems have taken new forms in modern times with declining attendance, competition of all types, and financial struggles that all challenge archives, historic sites, libraries, and museums.

Through the past experiences of museums, Redman argues for a crisis as “more a moment of truth or an important crescendo than a dark path to toward a certain calamity,” a theme for much of modern cultural expression. The book begins with how the Smithsonian recovered bigger and better after its fire of 1865.

Redman has “written this book to offer a version of how museums have successfully and unsuccessfully navigated several major crisis moments.” The author asks if museums have done enough to prepare for the challenges of modern times. “Whom do museums serve?” “How do cultural institutions continue to survive with curtailed operations?”

Redman gives a broad survey of his subject describing the major engines of change in modern American museums, both people and museums including such institutions as the Phoebe A. Hearst Museum and the Metropolitan Museum of Modern art, and such leaders as John Cotton Dana and Alfred Kroebler.

The emphasis in The Museum is on anthropological museums that support research, but the author asserts that the situations described are common to museums of all types and other institutions. Coverage proves uneven, with some subjects such American museums in World War II and the rise of New York’s great art museums receiving considerably more coverage than topics such as the pre-1920 museum.

“This treatment of museum history does not offer easy answers.” “Blind spots and biases have at times led to mistakes,” Redman warns. “Crisis moments have not always been dealt with effectively or understood accurately in retrospect.”

“Between 1860 and 1914, the number of museums in the United States nearly doubled to six hundred.”  Libraries and museums had little competition in how they could meet the needs of a growing urban population.

The author points to the problems of epidemic, riots, and war in 1920 to show that not every problem in forcing museums to become more pragmatic is new. Museums lost staff, permanently and temporarily, to such catastrophes. Attendance dropped. Projects and expeditions received cutbacks or cancellation.

During the appearance of prosperity in the 1920s, the great natural history museums of America became the weonderful buildings known today. Whatever these institutions did for scientific research, they became a symbol of the importance of the United States and the image of science to the general public.

The Great Depression of the 1930s brought on hardships of which 1920 could have served as a warning. Attendance and funding dropped. During those years, museums “can only rightly be classified as an intellectual and institutional backwaters.”

The New Deal that followed gave museums millions of hours of labor through such agencies as the Civil Works Administration. Within the Works Project Administration, the Museum Extension Agency and the National Youth Administration helped museums to catalog their backlogs of artifacts and build new collections and exhibits.

These federal agencies and others such as the Civilian Conservation Corps also conducted “archaeological projects in twenty-four states over the course of nine years.” Such New Deal programs gave these museums “credible opportunities to advance the respective missions of cultural institutions” but “the lack of long-term stability” proved almost as problematic as periods of downturns in funding.

During World War II, some museums closed but many American “museums found themselves mobilized as agents for making total war.” “The Smithsonian’s range and depth of efforts both direct and indirect was unique and consequential.”

These institutions still find themselves victims of war but now as public protest sites. Native peoples, for example, insisted upon the repatriation of the artifacts of their cultural past—and the remains of their ancestors! Race has become an issue.

Museums came to serve as “familiar,” in different ways, “places to battle social and political matters.” Public institutions had to broaden and reinterpret the artistic and material culture presented. The controversy over the interpretation of the Enola Gay, the World War II bomber that dropped an atomic bomb became a prime example.

The Museum takes the reader behind the displays that present the public face of culture and science, to show how they have changed and will have to change to not just survive but to have relevancy in our age. The writing in this thought-provoking book on a subject not generally known is clear and well-organized. It has annotation.