The Museum of Modern Love 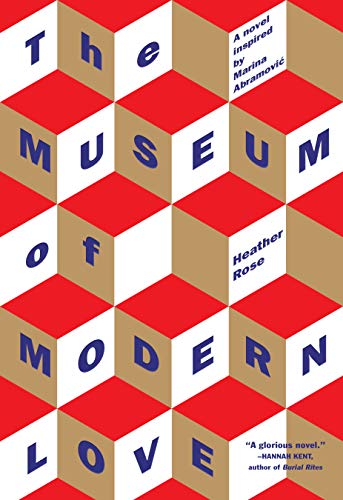 The Museum of Modern Love, by Australian writer Heather Rose, is a meditation on love and creativity. In an ambitious admix of real-life figures, memorable fictional characters, and a ghost(!) or two, Rose guides an exploration of how best to live and, with distinction, how art might assist. Beware: The Museum of Modern Love is deeply romantic.

Rose frames her investigations around the real-life performance artist Marina Abramović and her legendary work, The Artist Is Present—performed at New York’s Museum of Modern Art in 2010. In that work the artist sat silently at a table, as, one by one, viewers sat across from her for as long as each participant desired. The writer herself sat four times, transfixed by the power of Abramović’s unflinching gaze, enlivened by its mysterious intimacy.

In her earliest conception of this novel, years before the MoMA presentation, Rose entertained an image of an artist’s last meal, visualizing the table, the food, the guests. After attending The Artist Is Present, Rose realized she could not fictionalize the honoree. She queried the artist.

Abramović consented to being portrayed as herself in this novel—with no contingencies. Such generosity of spirit is compounded in The Museum of Modern Love, and eventually reflected in each of its central characters—a composer, a teacher, a student, an art critic, and presiding phantoms. All are loosely connected by their attendance at The Artist Is Present and its impact on their lives and afterlives.

An idea of art as transformative is most readily tracked through the central fictional character, Arky Levin, as he plods, painfully, toward evolution. Arky is separated from his wife, acclaimed architect Lydia Fiorentino, who is slowly dying from a rare disease. (Thanks to confident prose, soap-opera aspects of characters’ lives may reconfigure as appropriately operatic.) Lydia (think Mimi in La Bohème) will seem too saintly to some readers, but she brings prudent attention to mortality. In a hospice-like facility, she’s legalized a request that her husband not see her again—an apparent effort to spare him emotional pain.

The kindest thing that can be said about Arky, who offers no initial protest to his wife’s restraints, is that he lacks agency. Lydia’s illness has given him the time and space he thought he craved. He’s agreed to compose a score for a new movie, but the work is stalled. He fails to connect with friends, some of whom he’ll pretend not to see at The Artist Is Present. Saddest of all is his failure to know his med-student daughter (a precociously judicious character, with whom one would have liked to spend more time).

Arky’s hapless mental and physical wandering is first paused by a visit to MoMA, where he meets Jane Miller, an art teacher from Georgia.

Jane, recently widowed, has come to New York expressly to see The Artist Is Present and to escape a paralysis of grief. Her character restores merit to sincerity and her complete lack of self-consciousness refreshes. “I think art saves people all the time,” she says to a stranger standing next to her at an early performance of The Artist. . . The stranger is Arky Levin.

Thus The Museum of Modern Love begins to connect its considerable dots. “Do you know,” Jane telegraphs, “that Brancusi, the sculptor, for 20 years or more, worked almost exclusively on a marriage of the egg and the cube. . . [those sculptures] don’t look like eggs and cubes, but when you know, you can see it.”

Jane intuitively understands invisible influences and how they may manifest, “Funny how we don’t teach that in school. You know, how things that are unseen are nevertheless real.”

Enter ghosts. One of them is Abramović’s long-dead mother, Danica, who inspires some of the novel’s most provocative prose. “Danica ran as ghosts run, measuring her speed in trees and stars, crossing Central Park and back again.” “Discipline is the only thing that protects you when the world goes mad.” “Give them long enough and men are always disappointing.”

Other spirits seem to whisper or laugh in characters’ and readers’ ears. “Art creates a certain familiarity with loneliness.” “When certainty can be so frightening, uncertainty can be a form of protest.” “Loneliness was silent, almost soundproof.” The ghosts accommodate Rose’s propensity to philosophize: “It’s no easy task to balance a sense of irrelevance with the longing for glory, the abyss with the applause.”

As the novel’s MoMa performance ends, Jane has returned to Georgia with renewed self-confidence, and Arky has moved inexorably to reclaim a purchase on love. Readers may rise from the sumptuous table Rose has set with gratitude for what the writer calls a “love letter to every woman who has dared to pursue her art.”

Special kudos to the author for a pedantry-free examination of art’s ability to change lives—and for this novel’s tacit implications of the vanishing space between fact and fiction.

Joni Tickel is a freelance editor.