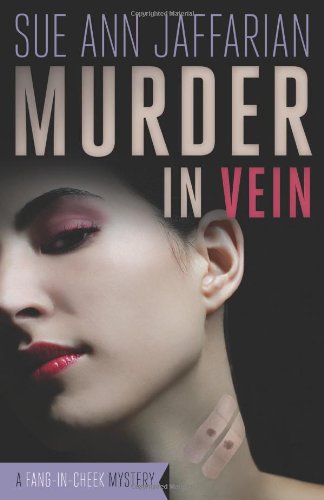 Murder in Vein starts off with a tense and exciting kidnapping, and then falls into worldbuilding that slows things down. The characters are interesting, but they are far too talky in the first half, telling more than we need to know, repeating things we’ve already been told, and explaining to the point of almost being mouthpieces rather than characters.

And then, somewhere around the middle of the book, just short of where one might be tempted to declare the whole thing proof of the writing class wisdom of show, don’t tell, it changes. It’s like the book as a whole woke up and realized it had a good idea and a decent set-up, and from then on, the rest was all action: Everyone went out and did things, tracked information, and interacted with the world the first half had so painfully set up. Which is exactly what characters in a mystery book need to do.

As a chamber drama with vampires, the first half fails. As a pulp-inspired paranormal mystery involving vampires, the second half does much better. As soon as the main character stands up for herself and starts engaging the events she’s found herself in the middle of on her own terms, the whole book improves greatly.

Fans of Sue Ann Jaffrian’s chubby heroine of the Odelia Grey Mystery series might find the too-frequent mentions of how young and thin and beautiful Madison Rose is annoying, but she comes out interestingly hardheaded at the end.

The style is somewhat lacking in flair, but there’s promise by the last page that this, too, is improving, and the rest of the series will be smoother and lusher. The wisdom of setting a vampire series in L.A. is made moot by the fact that it’s cold and rainy for most of the book, and these vampires don’t suffer from the drawback of bursting into flames when they are touched by sunlight. And the way the vampires are presented as animals attempting to act like civilized people has interesting implications.

Also, it’s refreshing to read a paranormal mystery where the main character doesn’t find vampires all that attractive, and where the detective is not the main focus of the book. The fact that these elements are established here with other interesting ideas, speaks well for the rest of the series that will follow.

Murder in Vein is billed as a “Fang-in-Cheek Mystery;” this would imply more coyness or play than is immediately detectable in the book. This also might have been perfect for lightening up all the dense description, but in the end, the book was exciting enough to keep the pages turning. The mystery made sense when it all played out—which is exactly how it should be.