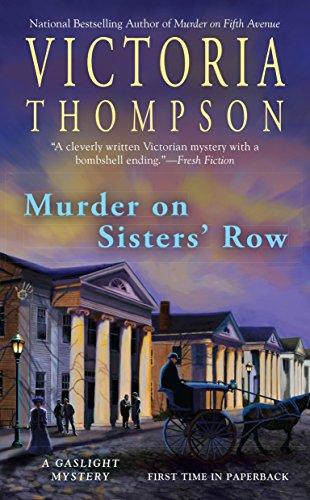 The template for the mystery is who got killed and who did the killing. The subset of historical mysteries offers readers a chance to step back in time and see the world from a perspective that can be surprising or even unnerving, a chance to examine their own prejudices and morals. These books remind us as much as we may like to think, history doesn’t move inexorably upward. In the mid-seventh century C.E. in Ireland—the Sister Fidelma mysteries by Peter Tremayne—Irish laws gave many rights and protections to women. Fidelma is a qualified dalaigh, or advocate of the law court.

Contrast this with 1890s New York, where widow/midwife Sarah Brandt earns her living. She is lucky to have a job, even luckier that the job isn’t in a sweatshop. Most women in New York are expected to give their wages to their family. This leads to a form of indentured servitude, a Hobson’s choice between marrying and having a husband support you, or poverty since you will never earn enough to live on your own. Given this reality, working in a brothel seems almost reasonable. The upside is you may be able to retire with some money. The downside is everything else.

Sarah’s family has money; they can trace their linage back to the Knickerbockers, the early Dutch colonists of New York. Sarah chooses to work because she has a valuable skill, and since she has been married, knows the joys of running her own household. She has added a foster daughter, Catherine, and her nursemaid Maeve. They have become a happy family.

In Murder on Sisters’ Row Sarah is called to a brothel to aid in the birth of Amy, one of the prostitutes. The girl wants desperately to leave the brothel, and begs Sarah for help. Amy has heard a Mrs. Gregory Van Orner helps girls like herself.

Sarah tracks her down at the New York Charity Organization Society (the COS) in the United Charities Building. There really was such a place, and it had very (to 21st century minds) some bizarre rules. Such as if one charity in the building helps a family, no other charity can help the same family. Strict records are kept to prevent double dipping because too much help is “encouraging pauperism and imposture.” Society women may assuage their consciences by volunteering here, but it is clear no one that runs one of these charities ever needed help. Is the real reason Mrs. Van Orner helps fallen women because her husband is known to frequent them?

Part of the fun in this series comes from Sarah’s adventures with Frank Malloy, a Detective Sergeant for the N.Y.C. police department. He has to contend with the fact that murders are solved only when the rich and powerful want them solved. Frank doesn’t bother telling the rich he won’t accept bribes, because no one will ever believe him. He has also learned that telling Sarah not to get involved is also useless.

It is the classic sleuth tradeoff: Sarah can get into places Frank can’t and Frank can give Sarah information she couldn’t get otherwise. Of course there’s the possibility of a romance between them, but class distinctions are a sticking point.

The most interesting character in the book is Mrs. Walker, the madam, who runs a tight ship. She has seen lots of girls like Amy come and go, most of them with the same dream—marrying one of the clients. She admits although Amy does make money for her, there are women that come knocking on her door every day for an opportunity to earn money.

How to help the poor, how to fight for gender equality, how to raise children that are left behind—all still are battles faced today. Maybe Thompson writes the series with the saying of poet and philosopher George Santayana in mind: “Those who cannot remember the past are condemned to repeat it.”