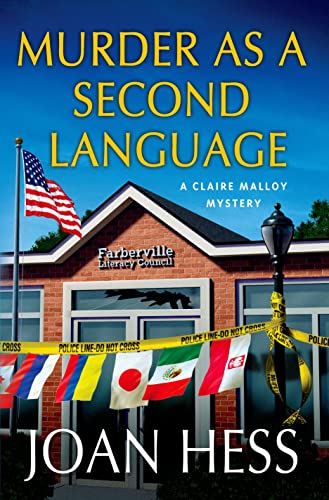 Fans of the Claire Molloy mystery series will have already gobbled up the previous 18 volumes and be waiting in line when this one hits the shelves.

New readers starting on number 19, however, should approach with caution. There’s a fine line between amusingly sardonic and annoyingly snarky, and it’s often hard to tell which side of the line Ms. Hess is writing from.

Best way to approach Murder as a Second Language is to read the early books and get a feel for Claire’s erudite wit. Else she may appear too mean-spirited to be enjoyable.

The book gives a satisfying read if you’re a nice person feeling unkindly toward your fellow man that day. And it’s hilarious if, like Claire, you’re “always in the mood to outwit the witless.”

Putting aside this aspect (hard to do, because the novel is so loaded with zingers it’s like wading hip-deep through nettles), there’s a clever cozy mystery underneath.

Claire has lived in the idyllic college town of Farberville, Arkansas, for years, running her bookshop on a shoestring. During her cumulative adventures as an amateur sleuth, she hooked up with, and is now married to, Deputy Chief Peter Rosen.

Thanks to him she has acquired her dream house and a comfortable living. Though she still owns the bookshop, it’s being run efficiently by someone else, leaving her at loose ends.

Taking up French cooking neither fills her time nor gratifies her interest in other people’s affairs. So when her college-bound daughter starts volunteer tutoring for the summer in order to beef up her resume, Claire looks into the same program at the Farberville Literary Council.

But instead of becoming an English-as-a-second-language teacher, Claire gets drafted onto the Board of Directors and sucked into their messy affairs. A universally disliked students ends up murdered, and investigation leads Claire into other crimes and schemes among almost everyone on the Board.

Her investigation must be under the radar, because at times it’s a direct conflict of interest with her police officer husband’s job. Why he continues loving and trusting her despite her defiance of his legitimate authority—in thought if not in deed—remains a mystery in itself. Likewise, why so many people confide in her about matters that are none of her business leaves one shaking one’s head.

Throughout the mystery, Claire and her family trade tongue-in-cheek witticisms (or are they snotty sarcasms?) about themselves, each other, and pretty much everyone else. Students and staff at the Literacy Council give them diverse human targets to toss their darts at.

Often the humor feels strained, suggesting that decades of having to be funny can cause author fatigue. What should be belly-laughers sometimes come across as just sourness. These are balanced by equally incisive descriptions that are benign or lovely.

Older readers may appreciate Claire’s observations about the younger generation; for instance, in this scene at a trendy coffee house:

“Most of the students were entranced with their laptops, their hands flickering over the keyboards like dragonflies over a pond. A few were engrossed by electronic readers and cell phones. They might glance up if a bomb exploded nearby, but I doubted I could gain their attention by standing on a table and ripping off my clothes. The coffee shops of my college days were loud and raucous places where philosophical arguments competed with poetry slams and subversion. This place resounded with clicks.”

Claire takes generational differences in stride, along with the mass of other human foibles. When she’s not plowing over people, she’s compassionate, understanding, and warm. This mix of traits, combined with her nosiness, allows her to find connections invisible to the police and extract information from people unwilling to share it with officials. It also motivates desperate criminals to want her out of the way.

In the end, all comes out well, setting us up for another cozy caper. If the series continues in the same vein, however, the publisher may have to add snark-warning stickers to the cover.