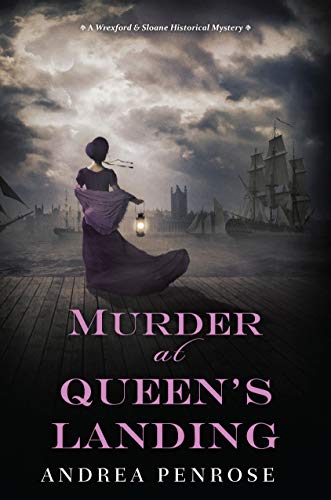 “Murder at Queen’s Landing is a high-paced adventure with a light feathering of attraction between the protagonists. After all, it’s hard to take time for courting when you’re protecting the people you care for, in the face of a powerful criminal mastermind.”

This is the fourth in Andrea Penrose’s Wrexford and Sloane historical mystery series, as Lady Charlotte Sloane takes the bold step of re-entering London society in Regency England. Her partner in crime solving, Lord Wrexford, has a private laboratory for his chemical research, as well as wealth and grand homes. His description of Charlotte is “A lady of infinite textures, woven of complexities and conflicts . . . After all, she clothed herself in quicksilver shadows.”

But on Murder at Queen’s Landing, to resume her position in polite society, Charlotte needs to set down her sardonic quill, and instead summon courage for a new venue:

“Lady Charlotte Sloane slowed her steps and drew a deep breath as she eyed the ornate archway leading into the ballroom. Music floated out of the open doors, the notes twirling a merry dance with the effervescent laughter ad discreet clink of champagne glasses … It was the stuff of every wellborn girl’s dreams . . . To her horror, Charlotte felt a prickling against her eyelids. Damnation—I ran all the way to Italy to escape living in just such a gilded cage.”

Fortunately, even a society ball can be a source of intrigue, and soon Charlotte realizes that her friend Lady Cordelia, who in turn is a brilliant mathematician, is involved in a murderous plot. But is she responsible for the death? What about Lady Cordelia’s brother Woodbridge? When these siblings vanish amid secrets and revelations surrounding a high-finance trading scheme, even Charlotte has grave doubts.

Lord Wrexford, in turn, has the benefit of a masculine world of assistants like his valet Tyler, and worldly insights. When he considers the banking list unearthed, he’s more prone to deep thought:

“He drew in a pensive breath. And released it in a low snort. ‘Is it just me, or do you also smell a rat?’

“Tyler took a sip of his brandy. ‘The odor is definitely teasing at the nostrils.’ He turned the glass in his hands. ‘But if it was planted, who did it? And why?’”

What neither of these high-born sleuths could have guessed is that the complexities of finance would pit them against some of the most potent forces of England, including the government-shielded East India Company. When this direction becomes clear, Lord Wrexford’s valet admits, “Unlike our previous opponents, the East India Company has both the resources and the power to crush anyone who stands in the way of their plans.”

Each sleuth must recruit team members to tackle this, and Charlotte’s own, whether garbed in silks or recruited from the boys of the street, bring passionate loyalty and insider information to the tasks ahead. In addition, Charlotte’s secret livelihood, crafting clever and cutting cartoons about the figures around her, can slice into even the realms of power.

Penrose’s writing is tight, smooth, the experienced narrative of a seasoned storyteller. Although her backlist includes many a Regency romance, Murder at Queen’s Landing is a high-paced adventure with a light feathering of attraction between the protagonists. After all, it’s hard to take time for courting when you’re protecting the people you care for, in the face of a powerful criminal mastermind.

However, the book’s ending hints not only at sequels to come, but at a deeper commitment between the daring and dashing investigators—one adventure at a time.