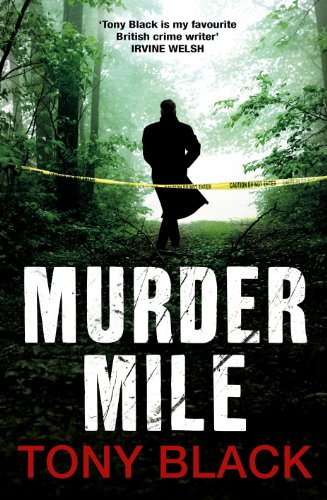 “An authentic yet unique voice, Tony Black shows why he is leading the pack in British crime fiction today. His deeply disturbing previous books have been labeled tartan noir, but Murder Mile is in a class of its own, from gripping beginning to shocking end. Atmospherically driven, the taut and sparse prose is as near to the bone you are ever likely to encounter in crime noir. Powerful.”

Murder Mile begins with the discovery of a mutilated body on the outskirts of Edinburgh. Ben, traveling in a car with a group of friends, needs to heed the call of nature. Walking a safe distance from the car so as not to be seen urinating by the young ladies accompanying him, Ben ventures out into the darkness and windswept fields of a barren area.

On his journey back to the car, he is suddenly disoriented, and becomes lost. Panic sets in—along with an eerie feeling akin to fear. Something isn’t right out here in the darkness, and he’s just about to discover he’s right in the middle of that something:

“As he looked ahead to the newly lit field, he stopped still. He felt as if he’d been struck in the chest.

“There was a pale, white object sticking out of the ground. It looked familiar to him, but in such an unfamiliar setting he couldn’t be sure.

“Ben slit his eyes, tried to get a better view. The object remained elusive. He edged a step closer, tilted his head toward the light but he still couldn’t see it clearly enough. As he took further paces, another cloud passed over the moon and the light weakened once again. His vision diminished and he was suddenly aware of a heady scent. The smell caught in the back of his nostrils and throat, it was like something from the science labs at school, he thought.

“The sky brightened some more and the fox he had been staring at took off for the long grass. When he regained his composure he realized the pale, white object he had seen was indeed familiar: it was a woman’s leg . . .”

DI Rob Brennan is asleep at home in the spare room. His marriage has entered its death throes, and he is preparing to separate from his wife as soon as he can find new accommodation. The phone rings; his new Chief Super Brian “Benny” Hill directs him to get dressed and attend to the crime scene on the city bypass.

At a pullout in the road Brennan is met by DC Stevie McGuire, who directs him into the field. The SOCOs (Scenes Of Crime Officers) are already setting up.

As Brennan looks at the tangled mass of limbs and blood before him he feels his heart freeze. The girl’s dress has been lifted up over her head and her genitals have been mutilated. McGuire leads the DI toward the girl’s head, lowering the folds of her skirt with the tip of a pencil to show Brennan the girl’s eyes have been gouged out. As Brennan gazes upon this he feels his own eyes draw him away from the horror. Turning back to confront it again, he notices a pair of stockings tied around the girl’s neck in a ligature, a pair of white panties are stuffed in her mouth.

As the investigation gets underway, Brennan is called into the Chief Super’s office. He is met there by DI Jim Galloway and the Chief Super; Galloway has some interesting observations about the case, which he says bears a startling similarity to the death of Fiona Gow some five years earlier. The murder scenes are within a mile of each other, and the cause of death is the same. DI Galloway reckons there is a serial killer on the loose and what’s more, he wants to take the case away from Brennan.

As if he hasn’t enough problems, at home Brennan returns to find his wife has packed his bags. She knows all about his past affair with the department psychologist, Lorraine Fuller, and doesn’t want him around anymore. Brennan promptly finds a single room rental with a shared toilet on Montgomery Street, a short walk from the flat of his former boss, Wullie, who is living in a dilapidated state, drinking his days away.

Brennan feels he has reached a new low as he goes to sleep on a pillow smelling of stale cigarette smoke and sweat. He thinks of his daughter, Sophie, and how he will explain things to her; then he thinks of the murder victims and knows he has other priorities to face. . . .

An authentic yet unique voice, Tony Black shows why he is leading the pack in British crime fiction today. His deeply disturbing previous books have been labeled tartan noir, but Murder Mile is in a class of its own, from gripping beginning to shocking end. Atmospherically driven, the taut and sparse prose is as near to the bone you are ever likely to encounter in crime noir. Powerful.