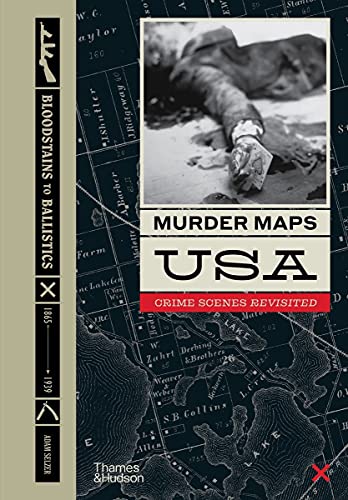 “This book is really not about homicide but about crime, justice, and the science used to find the truth. To understand forensic criminology today, we must learn where it came from.”

Homicide is larger than reality in any society. It becomes part of any culture’s legends and myths. Adam Selzer in Murder Maps USA offers accounts of selected American crimes but in a way that, while entertaining, also often educates in the history of science in criminal investigation.

Forensics grew and developed in parallel with the development of modern law enforcement in general. Before 1900, the usually small all white male police forces might even use reporters rather than experts or deductions. Their investigations often “centering on beating a suspect with billy clubs until they confessed.”

“Introducing expert forensic analysis of any sort in court was not normal practice.” “Experts were apt to let facts get in the way of a good story.”

Murder Maps USA begins with something of an incomplete history of how slowly law enforcement in the late 19th century came to embrace and even to really create forensics. “Beneath it was the revolutionary concept that science could fight crime” even “as authorities were reluctant to bring in [what] experts and scientists [that were available] to investigate crime.”

“Early texts on the discipline seem at best laughable, however, at worst racist.” “Great emphasis was placed on physical features and race.” “Innovations were driven by the belief that minute analysis of the body” would determine if a person was of the “criminal type.”

Parallel with the rise of forensics came personal identification as fleeing felons could use new transportation technology to escape, hide, and disappear. The members of the murderous “Bender” gang, for example, were never caught.

Finger printing, files on individuals, and photography only slowly came into use. Questions of identity could make a book of interesting cases in itself. In the 19th century, these incidences often deteriorated to passing judgement among conflicting witness testimony, what might have made some interesting additions to these tales.

Much more could be written on American crime in this era, but the author does not intend a through accounting of every major felony in America but rather to tell interesting accounts of the history of forensics often through certain particularly illustrative cases. Murder Maps USA has floorplans, maps, murder weapons, and photographs.

Some of the principals are well-known such as John Wilkes Booth and Jesse James but notoriety sometimes is a lesser consideration as to what a case can teach. Many cases receive only a paragraph each, however, with no reason given for why, or any general conclusions. Often the book is confusing, such as why it includes a map of major lynching in Georgia in the 1920s.

Some of these cases, such as those of Richard Hauptmann, and the New Orleans Axe Murderer, remain controversial. Not every murder is a mystery, and some crimes likely are only unsolved in the imagination. The latter could include Lizzie Borden, John Bozeman, and Leo Frank. Forensics can explain why and can still uncover secrets worth knowing even when the details of the crime are well-known and exposed by the evidence.

Lessons in Murder Maps USA also teaches much about the importance and limits of criminology, then and now. This book is really not about homicide but about crime, justice, and the science used to find the truth. To understand forensic criminology today, we must learn where it came from.

Murder Maps USA is organized (or disorganized) by geographic region. It has no table of contents, index, or even a proper title page. It does have 764 illustrations and maps. To facilitate understanding the crimes, it has a “Criminology Matrix.”