Murder on the Last Frontier (A Charlotte Brody Mystery) 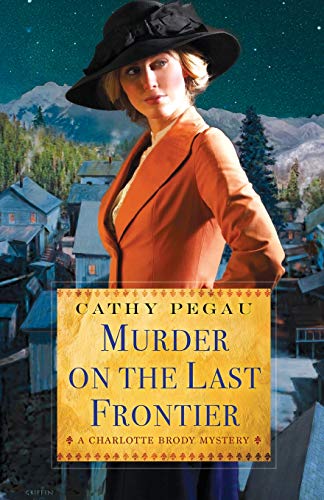 It’s said that people go to Alaska to start new lives, or at least to forget an unsuccessful past.

Such is the case for Charlotte Brody, a suffragette who follows her brother to Alaska in 1919 after making some mistakes she needs to get away from.

A budding journalist, Charlotte plunges immediately into investigating the death of a local prostitute. She “helps” the police through good intentions and a romance with the deputy, who tries to protect her from trouble but can’t, since she won’t comply with all of his restraints.

Instead she is compelled to help downtrodden women because of her beliefs. “She was involved because she had to be. Because someone with a better idea of what [the prostitute] might have been experiencing . . . needed to seek justice for her.”

“Their parents had instilled in both of them the duty to serve the less fortunate. [Her brother] had gone into medicine to heal physicals ills, while she had opted . . . to shine a journalistic light on unfair conditions and injustices.”

So off Charlotte goes, asking questions of people the police don’t seriously consider, and getting those folks to impart information they won’t share with the police. It gets her into some serious scrapes but leads her to the bottom of the mystery (and back into the law’s good graces).

Well-meaning interference is a common scenario in the amateur-sleuth genre, reliably delivered in book 1 of this new series. Although the series has promise, with a vibrant character voice, enthusiasm, and energy, and historically accurate situation and setting, conveyed through a solid sense of place this launch volume is a little wobbly.

It has the underlying feeling of being a contrived book, as if the author said to herself: Oh, I think I’ll write a historical romance about a feisty woman journalist at the cusp of the feminist movement and set it where the frontier and society were crashing together. Then I’ll give her an affair with the handsome law officer so she can be in the middle of things. Let’s see . . . I’ll get her there because she’s escaping a woman’s problem of the times and her brother is already established; and I’ll pick Cordova, Alaska, because nobody’s done that time and place before.

Charlotte’s earnestness and wit don’t quite cancel out the author’s shadow. Then again, one of Charlotte’s favorites activities is people watching, which may explain the you-are-observing vs. you-are-there feel of the book.

As well intentioned and likable as Charlotte may be, at heart she’s a ruthless reporter. In a given moment she can be sensitive and compassionate—and cold. “[H]uman nature was often a mystery,” she says. But: “It also led to some of the best stories.”

Which she zealously types up and sends back east to Modern Woman magazine as “a series of articles by a woman in the wild Alaska frontier.” In the end Cordova provides a job opportunity with the local paper. Now with a reason to stay instead of keep running, she can leave her past behind like a true Alaskan, and carry readers forward through many adventures.