Murder at the Lanterne Rouge 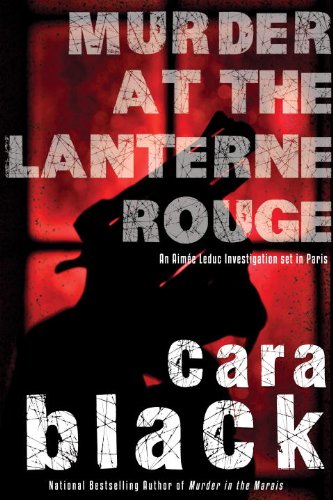 “Murder at the Lanterne Rouge is wonderfully plotted, and Cara Black ties together the past and present with élan. We’ll always have Paris.”

Even in January, a cold, gray, slushy Paris is alluring. Detective Aimee Leduc ruins more than one pair of vintage designer boots in the muck—but that’s a small price to pay for catching suspects.

Aimee and her business partner Rene own a detective agency. Rene has fallen quickly and deeply in love with Meizi, a Chinese woman he met at his dojo. He wants the two most important women in his life to meet, so Aimee agrees to dinner (along with Meizi’s parent/chaperones) at Chez Chun, a restaurant in the Marais district—home to one of the oldest and smallest of the four Chinatowns in Paris.
Taking the Metro, Aimee exits by “the Romanesque church that was now the Musee des Arts et Métiers. Harmonic Gregorian chanting wafted in the cold air and drifted into the enveloping night. Petals of snow lodged like nests of white feathers in the bare-branched trees. ’’

At dinner Meizi gets a call on her cell phone, goes outside to answer it, but doesn’t return, Rene and Aimee go look for her and discover a body; shrink wrapped in plastic, but no Meizi. When the police get there, onlookers (including the chaperones) have faded back into the shadows, legal or illegal immigrants unwilling to talk to authorities. Pascal, the victim, (who turns out to be an engineer) has a picture of Meizi. How are these two related?

This mystery is both classic (the girl is not who she seems to be) and 21st century fresh. The action takes place in the medieval Marias district, home to many immigrant communities over the centuries. Aimee meets Pascal’s aunt Mlle. Samoukashian who is Armenian; her parents sought refuge in Paris from the Turkish genocide in the early part of the last century. She was part of the résistance during WWII. She knows all about hiding.

Pascal taught at the engineering school near Aimee’s Metro stop—the Conservatories’ National de Arts Métiers—and he belonged to the Gadz Arts, a secret society that dates back to hundreds of years. Members are close, even acting as godfathers to each other’s children, and helping fellow adherents into important jobs, etc. But how dangerous can engineers be?

The pace accelerates as fast as Aimee’s Vespa. The details of the series, Aimee’s love of vintage couture, her love life, and the specter of her mother’s disappearance, all make welcome appearances here.

Murder at the Lanterne Rouge is wonderfully plotted, and Cara Black ties together the past and present with élan.