Murder in an Irish Cottage (An Irish Village Mystery) 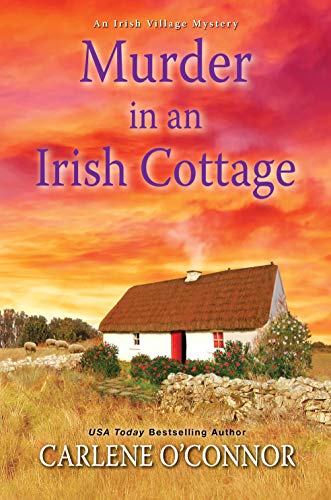 “Wonderfully captivating . . . A thrilling addition to the murder mystery series . . .”

Family is everything to Siobhán: her five siblings; her dear departed mother for whom the family business, Naomi's Bistro, is named; and now her fiancé, Macdara Flannery. So precious is her engagement that Siobhán wants to keep it just between the two of them for a little longer.

But Macdara is her family, which is why when his cousin Susan frantically calls for his help, Siobhán is at his side as the two garda rush from Kilbane to the rural village where Susan and her mother have recently moved. Unfortunately, tragedy awaits them. They find Susan, who is blind, outside the cottage, in a state. Inside, Aunt Ellen lies on her bed in a fancy red dress, no longer breathing. A pillow on the floor and a nearby teacup suggest the mode of death to their trained eyes: the woman has been poisoned and smothered. Someone wanted to make sure she was dead. But who?

Devout believers in Irish folklore, the villagers insist the cottage is cursed—built on a fairy path. It turns out Ellen Delaney was not the first to die mysteriously in this cottage. Although the townsfolk blame malevolent fairies, Siobhán and Macdara must follow the path of a murderer all too human—but just as evil. . . .

In Murder in an Irish Cottage, summer has arrived in the picturesque village of Kilbane, County Cork, where Siobhán and her brood are on a short 10-day vacation. We soon learn that she and fellow police officer Dara Flannery’s slowly evolving romance has now blossomed into a secret engagement. The action heats up when Dara receives a panicked call from his cousin, apparently his Aunt Ellen is in some sort of trouble. Distressed by the call, the pair heads off to find out what has happened and soon horrifyingly discover that his aunt has been murdered. We follow the pair as they try to unravel the mystery and find the killer.

Wonderfully captivating, Murder in an Irish Cottage does not disappoint. Interwoven with charming descriptions of lush green Irish landscapes and tales of folklore and legends, it is a thrilling addition to the murder mystery series. Readers have over time bared witness to Siobhán O’Sullivan’s personal growth from the beleaguered caregiver of five siblings to self-confident police officer.

“The meadow glistened and Siobhán could smell the peat and imagine how soft the ground would be beneath their feet. The sun was out now, and just as Siobhán had the thought, she turned and saw it; just behind the largest hill arched a magnificent rainbow. The colors were so bright and clear, it didn’t look real.”

Carlene O’Connor has continued to evolve the storylines of each of her characters into people that are likeable and engaging. She has done an outstanding job of crafting distraction and misdirection that is essential to any successful murder mystery. As the plot unfolds in this current tale, there are loads of twists and turns that keeps the reader riveted to their seats, guessing whodunit until the very end.