Murder Comes to Call (A Beryl and Edwina Mystery) 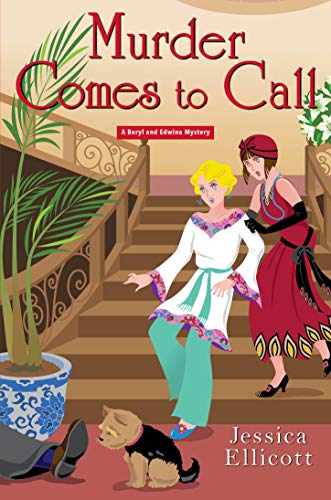 “The two women provide a welcome humorous touch as they guide us through their world.”

Jessica Ellicott’s Murder Comes to Call is a sweet cozy set right after WWI. With this, the fourth in the Beryl and Edwina series, Ellicott uses two strong female characters as amateur sleuths to lead us through the dangers of Walmsley Parva. Although the women actively drum up cases for their sleuthing business, Beryl has a knack for finding mystery in everything she does.

As the novel starts, she’s in court to talk her way out of a speeding ticket. She notices the rough treatment being doled out to Declan O’Shea, who’s guilty of disorderly conduct but shouldn’t have to pay the hefty fine of three pounds. He’s an Irishman at a time when the Irish are suspect because of their quest for independence, so the judge is unsympathetic. Beryl, however, immediately offers the man a job of part-time gardener at Edwina’s home, where Beryl lives herself.

The outgoing and often outspoken Beryl provides the yin of the story. An adventuress, she’s rather proud of being caught speeding. She hopes for adventure around every corner. Instead she contents herself with dabbling in other people’s business. When the census taker asks for help recovering forms stolen from his bicycle, she’s ready to put her skills to the test.

She doesn’t work alone. Edwina, the yang, is usually a willing accomplice. Sometimes her housemate drags her far from her comfort zone, but she is generally satisfied that Beryl will successfully get them out of whatever trouble she gets them into. Edwina has her own aspirations. She’s secretly writing a novel, but she doesn’t want anyone to know about it. That’s too personal.

The stakes are raised when a local magistrate is killed. Did he fall down those stairs or was he pushed? That’s the new mystery our heroines grapple with as they slowly piece both mysteries together. In between they dodge Constable Gibbs but offer to work with her. Although an aspect of the ending seems overly melodramatic for the material, the mystery winds down to a logical and clear solution.

Plotting isn’t the strength of this novel. Its charm stems from Beryl and Edwina and one additional character: Walmsley Parva itself. Anything can happen in this village. But the pace is as leisurely as a day in the Lake District. We’re given plenty of insight into our main characters’ thinking, and we gently roam from Beryl to Edwina and back again as they prepare their case.

Ellicott’s voice is consistent and light-hearted throughout. So is the gentle humor. The contrasting descriptions of the two main characters provide a concise example: “If [Beryl] had not won her automobile in a card game several months earlier, she supposed she would have had to purchase a bicycle herself.” “Edwina, on the other hand, was a champion worrier. Her fertile imagination was able to concoct the most unlikely and unpleasant scenarios out of the smallest hint of trouble.” The two women provide a welcome humorous touch as they guide us through their world.