Murder by the Bookend (An Antique Bookshop Mystery) 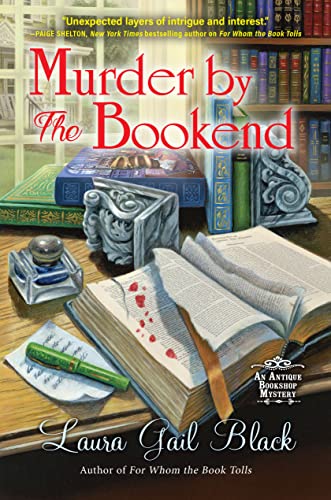 There are many, many cozy mysteries out there, more than any fan can read in a decade. This new entry into the genre doesn’t rank among the best, though it will satisfy undemanding readers.

It contains the primary tropes of the cozy mystery, starting with an amateur sleuth in a quaint small town: Jenna Quinn, operating an antiquarian bookstore in mountainous North Carolina. Her accounting background qualifies her to run the business, but she’s unconvincing in her passion for books.

Then there’s a supporting cast of quirky characters, unconventional police officers, lots of detail about small-town and personal life, an adorable pet, and assorted suspects to choose from. Most important for this genre, the murder occurs offstage, and the heroine helps solve the crime.

Unfortunately, it presents the elements in a cookie-cutter style, as if crossing elements off a checklist, and the support characters are stereotypical, with little nuance (i.e., the good people are very good, and the bad people are very bad, and those in between aren’t developed).

The protagonist, meanwhile, has enough issues to qualify as a complex character. But even these have a checklisty feel, and bias toward her weaknesses. This may change, as Murder by the Bookend is only volume two of the Antique Bookshop Mysteries. It is best read after volume one, rather than as a standalone or an entry into the world, because the first book lays the groundwork that may explain Jenna’s emotional immaturity and astonishing naiveté for somebody 26 years old in modern America.

Hints about her backstory are dropped in at regular intervals, but many chapters pass before readers are given enough information to understand Jenna’s unhappy history and how it colors her behavior. A recap comes after two hundred pages:

“In the last three months, the store has been linked to the following. . . . One, my uncle’s murder. Two, my arrest situation in Charlotte, possibly a murder and embezzlement. Three, a second murder tied to my uncle’s. Four, both murders being pinned on me. Five, Linus Talbot’s murder [this volume]. And if they can, six, Eddy’s [the dog’s] poisoning at the store.”

Okay, any of us might be less than our best after all that!

Additionally, and perhaps more profoundly, there’s a constant nagging mother in Jenna’s consciousness that jerks her around so she alternately acts in rebellion, true to herself, and in artifice, true to her conditioning. These make her untrustworthy, evidenced by the number of times she promises she will or won’t do something then does the opposite, often jeopardizing her reputation and relationships, and several times getting clanged on the head.

Her instincts are good, though, which is how she gets to the bottom of the mystery.

It starts at the grand reopening party at the antique bookstore Jenna inherited as a result of volume one. One of the guests is a rare book expert, who gets dispatched immediately afterward by the prize he won at the drawing—artisan glass bookends—most likely by somebody also at the event.

Of the suspects presented, all of them are plausible for the role of killer, and the best candidates have such repulsive personalities and selfish motives that any one of them would be satisfactory as the guilty party. Lots of page time is given to demonstrating their awfulness. Lots of page time, too, given to minutiae between the plot-advancing scenes, to make the book “cozy.” Combined, they cause the pace to drag and encourage reader skimming, unless they’re reading especially for coziness.

The most interesting aspect of the mystery is the list of rare books highlighted on the victim’s inventory. Jenna sees it as a crucial clue, but she can’t get the police to take her seriously. The lead detective scoffs at the idea of books being anything to kill for, and he carries antagonism toward Jenna from volume one. Meanwhile, her boyfriend on the force can’t participate in the investigation because he was present at the ill-fated party and has a conflict of interest. (But he’s a perfect romantic hero and plays that role through the book.)

Another policeman’s fumbling of evidence is how Jenna receives the victim’s inventory, along with his veterinary records about his dog, Eddy—the only actual witness to the murder. Jenna ends up adopting Eddy, who growls at all the suspects as if he knows something, in response to which somebody tries to poison him.

The most entertaining elements of the book are Jenna’s colorful ways of not swearing: “Hot pickles on a pastry!” “Hellfire on a popsicle!” “Holy cow on a cracker!” These set a sweetness of tone that’s reflected in her romance and friendships.

Presumably all will come together as the series advances, balancing out the too coziness of Jenna’s stories and the too rough edges of her character.