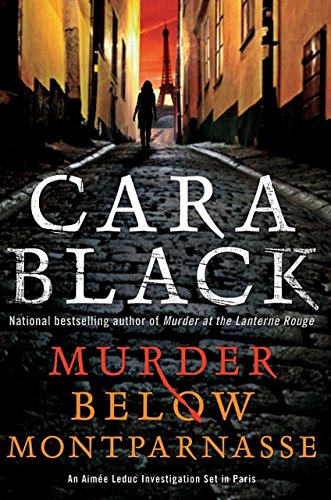 “Truth arises from a conflict of opinion.”
—French Proverb

As long as there are neighborhoods in Paris, Cara Black will not run out of places to put her Vespa transported, vintage clotheshorse private detective Aimee Leduc in danger.

In this outing, Aimee gets a phone call, from someone who intimates Aimee’s long lost mother is not only alive and well, but a “fixer:” someone who will help him recover an unknown Modigliani painting.

Aimee, obsessed with understanding why she was abandoned as a child, tears off to his Montparnasse atelier, but there’s no painting and Aimee is rewarded with a Serbian thug dead on the front window of the car.

As usual, Cara Black imparts her love for Paris. Here she vividly sketches the past glamour of Montparnasse. The bohemian life thrived here, and from 1910 to the start of World War II it was the heart of intellectual and artistic life in Paris. Aimee passes a building that has a sign Man Ray lived there.

The painting may be of none other than Lenin, who lived in Montparnasse, although no one in the book seems to notice the irony that the champion of the working class had a maid.

Even with this treasure trove, to work with Black’s plot is hampered by Aimee’s inability to come up with a plan. She reverts back to her father’s (a flic, French for a policeman) methods when she is stuck, but it never occurs to her that planning may be a better way to solve a crime than tearing off.

The subplot of Aimee’s business partner Rene recruited to Silicon Valley to make millions is forced, and by taking the reader away from Paris, even for a short time not only severely weakens the book, it exposes Aimee’s flaws because she has no one to keep her grounded.

The mirage of her mother has kept Aimee dreaming throughout this series, but has also given the young detective a perfect excuse to avoid living in the present. There are a few surprises in the last chapter to give the reader hope for both a grounded and high-spirited future.