Murder in the Bayou: Who Killed the Women Known as the Jeff Davis 8? 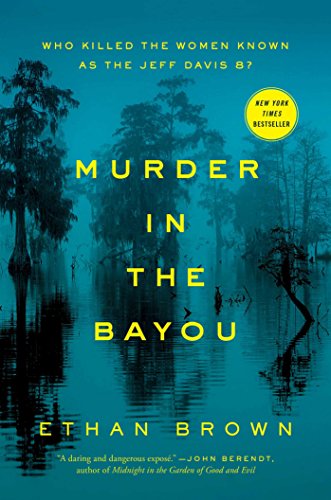 “[the book’s] mesmerizing allegations and scandalous conclusions . . . will captivate true crime enthusiasts as well as anyone who enjoys a good murder mystery with political intrigue.”

Who murdered the women known as the Jeff Davis 8? Is an unapprehended serial killer stalking the wetlands and byways of rural southern Louisiana? These are intriguing questions that have dogged law enforcement officials for nearly a decade. Located primarily in the southern reaches of Louisiana, the bayou is a defining feature of this unique region of the American South, and unlike the rest of the state, has its own pace, culture, and rules. The swamps and alligators might not be for everyone, but the Cajun people of the bayou feel right at home. Shadowy and often misunderstood, this region is often shrouded in mystery.

In 2014, HBO’s wildly successful and critically acclaimed television series True Detective debuted starring Woody Harrelson and Matthew McConaughey. This series was instrumental in bringing renewed interest to this secretive section of the country. The show focused on a mismatched pair of Louisiana state police investigators hot on the trail of a serial killer who is preying on young women deep in the heart of Cajun country. Although this quirky series is a work of fiction, it is alleged to have been inspired by a series of real life unsolved murders that have occurred in and around Jefferson Davis Parish. These murders are collectively and nationally known as the Jeff Davis 8.

Between 2005 and 2009, the bodies of eight female prostitutes were discovered in and around the outskirts of Jennings, a small town and seat of Jefferson Davis Parish. The bodies of these young women were dumped along highways, dirt roads, swamps, and canals throughout the area. Ethan Brown, an investigative journalist, private investigator, and author examines this riveting and spellbinding case in his new book Murder in the Bayou: Who Killed the Women Known as the Jeff Davis 8?

“The many threads that linked the Jeff Davis women in life (sex work) and in death (elevated levels of cocaine and anti-depressants, possible death by asphyxia) led local law enforcement to investigate the Jeff Davis 8 as a serial killer case.” But Brown’s multi-\year investigation has raised serious doubts about such an idea. He provocatively speculates that the Jeff Davis 8 were murdered for “knowing too much,” and that these homicides were the direct result of Jennings' brutal criminal underworld. Although Jennings resembles a sleepy, out of the way place, looks can be deceiving. For many decades the area has been the epicenter of violent criminal activity centered on the Interstate 10 corridor that connects the Texas border to Lafayette.

“To most Jennings residents, the Boudreaux Inn was simply a dingy motel off the interstate. But to workers at the motel and players in the South Jennings underworld, the rundown inn had an outsized reputation. Powerful people, it was whispered, patronized the motel. Those who ran the business were well connected in Louisiana politics.” Brown goes even further, disturbingly suggesting that there is a connection between local law enforcement and other powerful players to keep the case unsolved due to involvement in the profitable drug trafficking and sex trade.

“In life and in death, the Jeff Davis 8 were cast as outsiders by the ruling elite. Sheriff Ricky Edwards infuriated friends and family of the victims by publicly proclaiming that the Jeff Davis 8 all shared a high-risk lifestyle. Most interpreted this to mean that they were unworthy of sympathy or significant law enforcement resources.” Brown goes on to write, “It’s a staggering body count for a town of approximately ten thousand residents. . . . Complex murder cases such as the Jeff Davis 8 can remain open for years, sometimes even decades. But it should have been obvious all along that the Jeff Davis 8 killings were not the handiwork of a serial killer.”

The narrative of Murder in the Bayou is well researched and easy to read. The author uses thousands of pages of public documents and records as well as hours of interviews to doggedly investigate and arrive at his titillating assumptions on how and why each of these women were murdered. This book is thought provoking and explosive. Its mesmerizing allegations and scandalous conclusions revolving around the realities of modern day class division and brutalities of the rural South will captivate true crime enthusiasts as well as anyone who enjoys a good murder mystery with political intrigue.