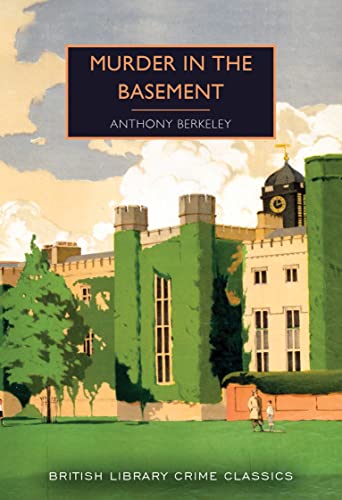 “With a set of clever twists, Berkeley finally lays out the issue of how best to see justice served, and the answers are both rueful and entertaining.”

This is a reissue of a “crime classic” by the Golden Age mystery authors, Anthony Berkeley, with an insightful introduction from series editor (and author) Martin Edwards. Framing the 1932 novel as “the first detective novel to contain a ‘whowasdunin’ mystery,” Edwards point readers toward more than just a gallop through a British investigation—and instead into regarding how Berkely in 1932 broke new ground in how to tell a good story.

The tale opens with Reginald and Molly Dane, charmingly inexperienced newlyweds, exploring their very first house. When Reginald finds evidence of something bricked up under the cellar floor, the two expect a treasure chest of gold—but alas, as Chief Inspector Moresby and his son confirm, the buried item is a body. And from here on (barely into Chapter I), Murder in the Basement marches with the difficulties of identification before forensic science’s modern miracles, and then to the competitive darknesses behind the scene in a school called Roland House.

With this entry, experienced Berkeley readers will perk up and sniff the wind, since the Chief Inspector heads to the author Roger Sheringham—a clever inhabitant of other Berkeley mysteries—to ask about the school. Sheringham spent two weeks there, doing research for a novel while also observing the stresses among staff members. Could he have actually instigated the crime with what he told the staff? Sheringham admits:

“They’d been egging me on to talk about murder . . . I gave them, in fact, a sort of lecture on murder, not as a fine art but as a practical means of getting rid of an unwanted person. I talked a lot of damned rot, of course, but then I always do. I never dreamed that any one of them could be taking me seriously: but it looks very much as if one of them did.”

Then, in a nimble twist that we’d now call “a bit of meta,” the crime novel shifts to offering Sheringham’s own manuscript, challenging both its author and the reader to pick out who the unnamed victim must have been. For if Sheringham’s theories of crime are effective, that should be possible from an outline of the situation—right?

With a set of clever twists, Berkeley finally lays out the issue of how best to see justice served, and the answers are both rueful and entertaining—demonstrating again why the early 20th century, in developing crime novels and their authors, has been proclaimed a Golden Age. Whether you’d pick your crime authors of choice during the 1920s and 1930s from Dorothy Sayers, Agatha Christie, G. K. Chesterton, and John Creasey, or their American counterparts Dashiell Hammett, James M. Cain, and Mary Roberts Rinehart, here is a good reason to consider adding Anthony Berkeley to your list.