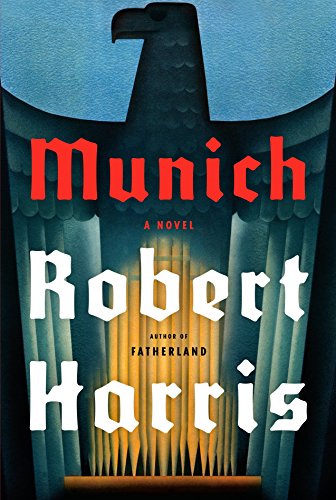 “An excellent read from a remarkable storyteller.”

It’s September 1938, only 20 years after the end of the Great War, which resulted in millions of casualties. British Prime Minister Neville Chamberlain sees the distinct possibility of another war with Germany in which strategic alliances will once again draw countries into a conflict they do not want. Therefore, he’s willing to sign the Munich Accord, giving Germany possession of much of Czechoslovakia's territory and greatly weakening its defences.

Against this backdrop, two former Oxford classmates, Hugh Legat, now a private secretary to Chamberlain, and Paul Hartmann, now a member of the German Foreign Office, must meet after six years and try to intercede before the agreement is signed.

Robert Harris, a former journalist and BBC television reporter, began his writing career with works of nonfiction. However, he’s primarily known for his historical fiction, including the alternative-history novel Fatherland, which posits a post-war world in which Germany has been victorious. Munich is his 12th novel.

Harris writes in a refreshingly straightforward style that’s immediately engaging. This style is also central to his recreation of the grim realities of the time. In the opening scene, for example, Legat waits for his wife to join him at a restaurant to celebrate their wedding anniversary. When she finally arrives, she’s carrying a small cardboard box, which he mistakes as a gift:

“‘I thought we agreed no presents?’ He lifted the lid. A black rubber skull, a metal snout and the vacant glassy eye sockets of a gas mask stared back up at him. He recoiled.

History has been extremely critical of Chamberlain and his policy of appeasement, but Harris provides a more nuanced depiction of him as a man who honestly believes that by signing the agreement, he will avert a second world war. As one of his supporters comments following the approval of the Munich Accord: “Oceans of ink will flow in criticism of your actions, Prime Minister. But millions of mothers will be blessing your name tonight for having saved their sons from the horror of war.”

Legat's counterpart in Germany, Paul Hartmann, risks his own life by trying—to no avail—to make Chamberlain aware of Hitler's true military ambitions. He recognizes that the carefree days he and Legat spent as classmates at Oxford are long gone because of the brutalities Hitler and his Nazis are inflicting upon Germany.

“This is what we could never grasp in Oxford because it’s beyond reason: it’s not rational. . . . This is what I have learned these past six years . . . the power of unreason. Everyone said—by everyone I mean people like me—we all said, ‘Oh, he's a terrible fellow, Hitler, but he’s not necessarily all bad. Look at his achievements. Put aside this awful mideval anti-Jew stuff: it will pass.’ But the point is, it won’t pass. You can’t isolate it from the rest. It’s there in the mix. And if the anti-Semitism is evil, it’s all evil. Because if they’re capable of that, they’re capable of anything. . . .”

In the end, Munich is not only an excellent portrayal of a pivotal time in 20th century history but also a cautionary tale of what the future holds when ordinary people fail to acknowledge evil. The parallels to the current resurgence of nationalism, racism, and xenophobia in the United States and Europe are rather unnerving, to say the least.

Once again, Robert Harris has produced an intelligent, well-crafted historical thriller. Once you’ve settled into your virtual seat across the table from Hugh Legat in the Ritz Restaurant in 1938 London and you’ve read the first paragraph of this story, you’ll find yourself compelled to keep turning the pages until you’ve reached the last one. An excellent read from a remarkable storyteller.