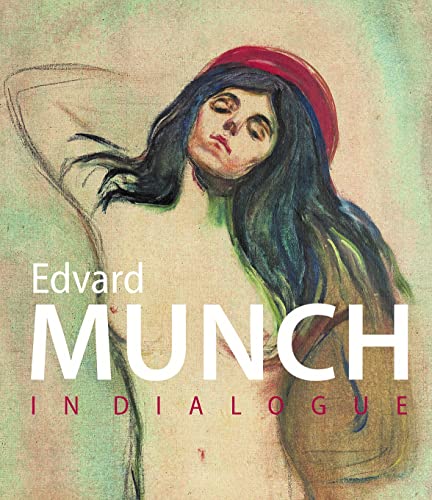 “Munch in Dialogue demonstrates why Munch is a heavy hitter in the art history world. His influences continue on, reaching out in unexpected ways. Munch in Dialogue is an interesting and accessible entry into Munch’s extended worldview.”

Munch in Dialogue is the catalog published in connection with the Edvard Munch in Dialogue 2022 exhibition at The Albertina Museum, Vienna. It is a culmination of essays and over 130 beautifully reproduced full color images.

People the world over recognize Munch’s iconic painting The Scream (1893) in which a person is front and center on a bridge letting out the rawest form of pent-up emotion that has ever come across a canvas. The entire image shakes palpably with ripples of reverberation penetrating far into the distance and far into the future, so much so that it is easy to relate those vibes to the ever-expanding stresses and pressures of today’s world almost 130 years after its initial painting. It’s uncanny how loud it is.

Japonisme was flooding through European pop-culture with prints from Tsukioka Yoshitoshi (1839–1892) building off the great legacies of Hokusai (1760–1849) and Hiroshige (1797–1858) impacting everything from fashion to theater to food . . . and of course, fine art. Edvard Munch (1863–1944), in stark contrast, seems ridiculously out of place. Where most artists were obsessed with light, color, nature and movement, Munch was driven by emotions of love, fear, anxiety, jealousy, betrayal. The Scream feels a far cry from Monet’s Bathers at La Grenouillère.

Not only did Munch not embrace the predominant artistic schools and themes of his time, he also rejected the Avant-garde, Art Nouveau, Cubism, Abstraction, Modernism, and basically every other style that emerged at the turn of the century. He occupied a radial post-modern niche in which he refused to be set in any other category other than the category “Munch”: He stood/stands alone.

Nevertheless, Munch’s experimental and unconventional work contributed to much of modern/contemporary art, setting a baseline for artists like Andy Warhol (1928–1987), Jasper Johns (1930), Georg Baselitz (1938), Miriam Cahn (1949), Marlene Dumas (1953), Peter Doig (1959) and Tracey Emin (1963)—all of whom join forces in the Edvard Munch in Dialogue exhibition. In fact, they are the ones who make up the “dialogue.”

Munch in Dialogue’s essays run through the threads of shared nuances with each of these seven contemporary artists. The array of similarities is quite broad. Dumas, for instance, shares an unexpected inclination for experimental photography as inspiration for her paintings. Munch, Dumas reflects, “achieved an interplay of dissolution, materialization, and fusion in visional representation . . . with all sorts of immaterial painterly means of expression.” Photographic double exposure lent itself to a unique result in images like Kristiania Bohemians (after 1907).

The downside to having one famous painting like The Scream is that the rest of an oeuvre is overlooked. Digging deeper reveals an incredible amount of diversity over an almost 40-year career. In reality, Munch was a “radical innovator and at the same time a bridge builder between old and new artistic approaches. He conceived universally intelligible means of depicting emotions and sensations . . . [which were] groundbreaking in his use of the tools of his trade, the techniques traditionally available to him as a painter, draftsman, watercolorist, and printmaker.”

Warhol was one who took the printmaking medium to an extreme, making The Scream into a series in 1984 similar to the Campbell Soup series or his Marilyn Monroe images from the 1960s. Perhaps this is what solidified Munch’s association with The Scream in the collective awareness so that people are not familiar with Munch’s other impressive works like his rich landscapes or his moody portraits.

Baselitz and Doig round out a Munch-esque legacy by picking up on landscapes. Cahn and Emin deeply feel Munch’s emotional moods in representing figurative expressiveness. Johns leans toward the lighter side of Pop Art, hooking into the dialogue with his knack for pattern and repetition. All of which is presented in thoughtful conversations and well curated examples.

It takes more than one grand-slam image to justify having a namesake museum (Munchmuseet, Oslo). Munch in Dialogue demonstrates why Munch is a heavy hitter in the art history world. His influences continue on, reaching out in unexpected ways. Munch in Dialogue is an interesting and accessible entry into Munch’s extended worldview.