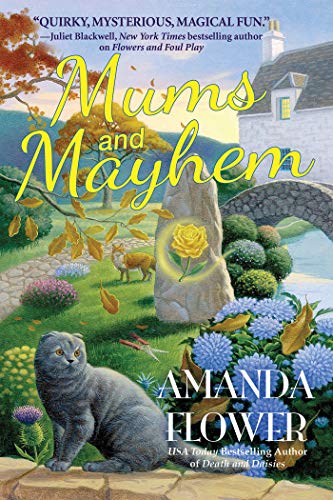 “Mums and Mayhem is light reading as mysteries go and lacks vibrancy in the romantic strand so typical of this subgenre of ‘cozy’ mysteries, but it embraces a charming part of the world, in eastern Scotland near the coast, and spins a sweet tale in the process.”

Fiona Knox owns a florist shop in the small quaint Scottish village of Bellewick. And, incidentally, a magical garden created on the former estate of Duncreigan, walled and vibrant, with its own elderly gardener. In two previous books in Amanda Flower’s Magical Garden Mystery series, Fiona’s learned that her inherited role as “Keeper” of what was once her uncle’s place connects her somehow to a mystical stone in the garden, as well as to its vibrancy and beauty.

So when her nightmare this time of seeing the garden shrivel and die turns out to be a vision of its actual condition, she’s knows she’s immediately responsible for its healing. Which, actually, she has no idea how to accomplish.

Making her less able than usual to concentrate on both her garden and her business is the arrival of her American farmer parents, presumably to summon her “home” along with her sister Isla, who’s followed her to Scotland and plunged into a romance with a jobless local. Most distracting of all is the music festival the town’s about to host, a return-home performance by a noted Scottish fiddler with his backup musicians. And, of course, there’s a romantic thread, since Fiona’s been developing a romance with Chief Inspector Neil Craig of the County Aberdeen police.

That’s a fortunate connection to have when Fiona discovers a musician murdered and learns her father, who’d once lived in this very village, was the last person known to see the victim alive. Not only will he not share details of why he went to see the musician, but he’s not talking about a recently revealed family secret, either: that he’s not Fiona’s biological parent. Her genetic father was “Uncle Ian,” the man who’s left her the garden.

Skeptics will be relieved to know that Fiona’s investigation of the crime has no major magical influences to it—the garden is definitely a background stress—so her focus is entirely on clearing her father of any possible role in the murder. Of course, as happens often with a series like this, Fiona’s presence in town has already coincided with death:

“’It’s hard to believe there’s been another killing in Bellewick,’ one of the constables said. ‘It’s almost like this place is cursed.’ . . .

“‘Go,’ Craig said, and his voice left no room for speculation. He wanted the scene secured and now. The constables went off to do what he asked.

“He glanced at me. ‘I’m going to go in the bus. Are you all right to wait here?’ He studied my face for even the slightest hint of a breakdown.

“I straightened my shoulders. ‘I’ll be fine. Do what you have to do.’

“He nodded and entered the tour bus.”

Though Fiona is not a very adept sleuth herself, she’s plucky, and her motivation pushes her through, and by the time the pieces come together, she also knows the mysteries that her own family has hidden for so long. Mums and Mayhem is light reading as mysteries go, and lacks vibrancy in the romantic strand so typical of this subgenre of “cozy” mysteries, but it embraces a charming part of the world, in eastern Scotland near the coast, and spins a sweet tale in the process.