Mugged: Racial Demagoguery from the Seventies to Obama 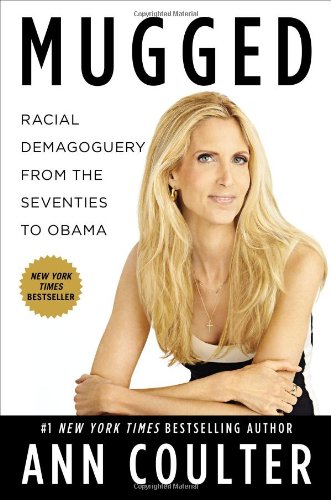 It has taken weeks longer than it should to get through Ann Coulter’s latest book, Mugged—and even then it was difficult to write an objective review.

Her premise is that it has been the GOP alone, not the Democrats, who advanced American civil rights, that the civil rights movement and discrimination is somehow over, and the whole problem is the fault of the liberals.

Not because her political and religious views are different than mine (though we do not agree on much of anything), it is because within the first 50 words, Ms. Coulter is in fact living up to the title of her book and mugging liberals, Democrats, the president, and the advances to the civil rights movement by both Republicans and Democrats.

Mugged is Ms. Coulter’s attempt to put her particular spotlight on politics. Political pundits like Bill Maher are having a field day asking the same question: What gives a white woman from upper middle-class Connecticut the right to claim expertise concerning America’s civil rights movement?

And yet Mugged is more than a discussion of civil rights. It is a diatribe seeking to demonize the political left.

Unlike her Demonic, which took a few pages before the beating began, Mugged insults and rewrites history from page one:

“Contrary to the myth Democrats told about themselves—that they were hairy-chested worriers for equal rights—the entire history of civil rights consists of Republicans battling Democrats to guarantee the constitutional rights of black people.”

That is partially correct. What Ms. Coulter fails to address is that from 1900 and Teddy Roosevelt to the signing of the 1964 Civil Rights Act, the Republican and Democratic parties made a political shift. Prior to 1900, the GOP was the liberal party and the Dems the conservatives; Teddy Roosevelt was the last liberal Republican; and Barry Goldwater, not Ronald Reagan, was indeed the father of GOP conservatism.

Ms. Coulter neglects to speak of the “Blue Dog Democrats,” and the “Dixiecrats” who saw the political landscape change and attempted to save the Democratic conservative movement. They eventually became conservative Republicans.

More disturbing is Ms. Coulter’s neo-revisionist history and her claims concerning the civil rights and discrimination.

“There had been real fights over civil rights for a century, especially in the [1950s and 1960s], but by the end of the sixties, it was over. Segregationist violence was gone, and public places integrated . . . the entire history of civil rights consists of Republicans battling Democrats to guarantee the constitutional rights of blacks.”

Two political scientists, both politically neutral, nearly passed out laughing at this statement. It is blatantly incorrect. Both had just finished watching Nightline’s October 26, 2012 edition focusing on the modern Ku Klux Klan and could not understand Ms. Coulter’s denial of the continued fight for civil rights and equality, not just by Americans of African descent, but by all American racial and religious minorities.

Of course Ms. Coulter is playing to her audience’s political and mythological beliefs that anything from the liberals is “bad,” and everything from the conservatives is “good.”

Ms. Coulter blasts such classics as A Raisin in the Sun and To Kill a Mockingbird as “liberal racism,” and classic films as Roots, Amistad, The Tuskegee Airmen, and The Color Purple as harmful to American blacks by telling a negative and “liberal” American story—all this added to the idea that somehow the O. J. Simpson verdict was due to white liberals kowtowing to the black community, and that somehow the behavior of the Los Angeles police officers who beat Rodney King was overblown by the liberal press because the victim was black.

This assault continues for 336 pages, mugging the opposition without letting up.

To make the reading more difficult, Ms. Coulter’s diatribe is not that well written, jumping from one thought to the next with no apparent connection. Individual chapters are repetitive of their precedents and really no different from other of the author’s works over the years. There is nothing new here—no new insight, no new explanation, and no new attacks—just Ann Coulter being a conservative bulldog.

From a political science perspective, even those claiming extreme conservative leanings have disparaged the book and Ann Coulter as doing more harm than good for the GOP cause.

While liberals and conservatives alike bend the truth and lie, massaging the message to shine the best light on their cause, Ann Coulter—like many of her libertarian, religious right, and Tea Party compatriots—really does not know how to play nicely.

For those on the far right, this is a perfect book to read before and after the election to “prove” how the liberal establishment is out to destroy America. For those on the left, it is proof positive of the anger and hatred borne by extremists.

This review has nothing to do with the 2012 election cycle, but with the “us versus them” mentality taken by Ms. Coulter and those of her ilk.

I wonder why Amazon discounted the book by one third before it went on sale. Worried about being able to sell this screed at full price?