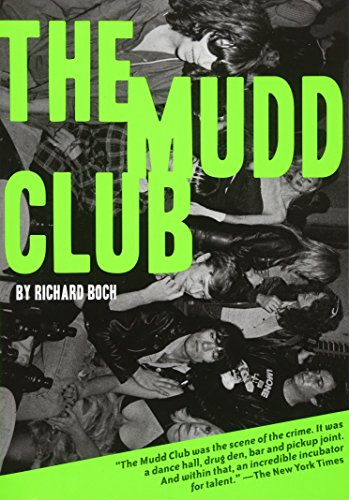 The Mudd Club was the Brigadoon of the late ’70s New York City music scene.

It appeared out of the mists or, in this case, the then-nearly abandoned steam-filled streets of Manhattan below Canal Street, entertained us all mightily for a few years, and then vanished, almost never to be heard from again. Until now.

While vanguards of the same time period and milieu—like CBGB and Studio 54—are written about endlessly, the Mudd Club, except for a fleeting reference in the Talking Heads song “Life During Wartime,” seemed to have been lost to memory.

But now comes Richard Boch, the young doorman of the club, to fill us in on what we missed inside. (Well, some of us anyway. This reviewer managed to get in although, after reading Boch’s book, one wonders how that happened.)

The location of the club, at 77 White Street, was part of its quirky appeal, as Boch points out: “Mudd quickly became the place to if you could find it. Word spread and people started hunting down a deserted little pocket of New York sometimes referred to as industrial Chinatown.”

Although Boch was admittedly high for much of his time in and outside the club, he remembers quite a bit and does a great job describing what it was like to be part of the late ’70s downtown scene. “Steve Mass [the club’s owner] wanted the same thing we all wanted—drinks, drugs, sex and entertainment, all wrapped up in a place that felt like home . . . his sense of irony, anarchy and point-specific open-mindedness was what the place was all about,” Boch writes.

“When you crossed it with a bit of semi-intellectualized political incorrectness and a heavy anchor in the worlds of art, music and fashion, you had Mudd Club magic.”

It was a clubhouse for the young, arty and daring; Debbie Harry of Blondie and her bandmates were often there as was artist Jean-Michel Basquiat and Talking Heads frontman David Byrne. Other stars drifted through. Mick Jagger and David Bowie got inside although poor Paul Simon, who the author says barked: “Do you know who I am?” did not.

The Mudd Club became a dance hall but a very different scene from Studio 54. The Mudd Club was as down and out as its neighborhood and seemed held together by spit and scotch tape; the bathrooms barely functioned, even as a place to snort a line of cocaine. The stage was right there on the floor and the great bands like the B-52s made sure everyone got up and danced the night away. Later, guys like Boch walked a block or so to Canal and Broadway where Dave’s Luncheonette, a now-departed institution, served up hot dogs and egg creams.

This book, published by A Feral House Press, has many photos and club handouts that make the Mudd Club experience come alive. It’s all very well done but the nagging question is: if you weren’t there or at least in New York City back in the late ’70s, will you care? That doesn’t mean it’s not a fun ride—it is and it was.