This Much Is True 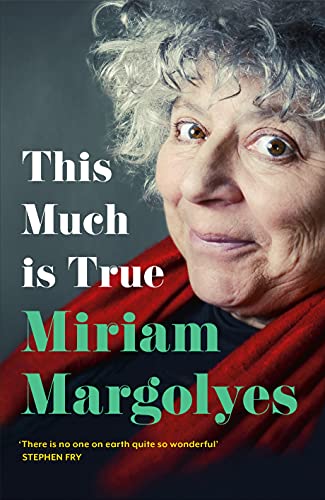 “This Much Is True is an entertaining, sometimes shocking, periodically uncomfortable, but altogether delightful read.”

“I’m quite sure you picked this book up hoping I’d make you laugh. . . . Let me tell you the truth about myself, too.”

Many celebrity autobiographies are self-indulgent and inconsequential. The celebrity spends considerable time relaying little known and little cared for anecdotes about their life, loves, trials, and tribulations all the while seeking to bask in the reflected glory of their time in the spotlight.

In some respects, Miriam Margolyes’s book does the same. However, and you knew there would be a “however,” Margolyes gives the reader much more.

Miriam Margolyes is a BAFTA award-winning veteran of stage, screen, and radio. In 2002, she was appointed OBE, but to most Americans she is unknown. That is unfortunate because she has been a working actor for more than 50 years. Yet according to Margolyes, “I will go to my grave best-known for being Professor Sprout.” This is particularly ironic since Margolyes’s recollection of that experience comprises one (very) short chapter. Still, that chapter presents one of the intriguing aspects of Margolyes’s entire book: the practical, business side of acting that involves contracts and getting paid.

Margolyes went home after completing her scenes for the last HP film. But it turned out she was still needed, and Maggie Smith (Professor McGonagall) demanded that she be recalled. When the call came, Margolyes told the powers that be “it means a new contract.” The producers balked, then capitulated, and Margolyes got the contract and payment. And that nugget reflects what makes this autobiography so interesting.

It is not often that celebrities talk about what may seem to be the more mundane aspects of their professional life. Getting roles, auditioning, contracts, and getting paid. In between the requisite anecdotes of famous people she worked with, including those she dislikes (she names them) and wouldn’t work with again, Margolyes gives readers the skinny on what it means to be a working actor.

One example involves her voice-over work in commercials, which took off in 1974. The author says, “As with radio, there is an art to commercial voice-over work. When you’re creating with your voice alone, the focus has to be absolutely tight . . . I was famous for my accuracy. I could shave four seconds off if required.” This provides readers with an insight into an art form that is not only overlooked, but never considered. She is especially remembered for her PG Tips adverts with chimpanzees—the ones with chimps drinking tea.

Margolyes also talks about her obvious respect for and admiration of the technical people, such as sound engineers, with whom she worked. She readily acknowledges her reliance on those professionals to make her look and sound good. Too often those behind-the-scenes folks are overlooked or ignored.

England has a long history of radio shows—not the talk radio so prevalent in the US— but legitimate plays and shows that require acting. Margolyes has a particular fondness for radio. She calls it “the most perfect performance medium . . . it’s an exercise in imaginative travel.” Anyone who has ever listened to a play on the radio—or an audio book—will appreciate that sentiment.

Even with all her voice-over experience and radio acting, Margolyes makes it clear she does not approve of dubbing. She won’t watch a dubbed movie; she believes in subtitles. In referencing dubbed movies, Margolyes says, “they always sound dead to me, because they don’t have the acoustic of the original action.” Interestingly, she also doesn’t like animation—she “wants the real thing.”

It is ironic, given her opposition to dubbing, that she’s done considerable work voicing characters in movies. One example is her work as the voice of Fly, the mother dog, in the 1995 movie Babe.

Whether it is stage, radio, television, or movies, Margolyes has spent a lifetime thrilling audiences with her creative prowess, even if the audience was not always aware of her work.

Autobiographies always include stories of the subject’s personal life, and Margolyes does not disappoint. She is a “militantly secular” out and proud Jewish lesbian who has been in a relationship with her partner for 53 years.

Miriam Margolyes turned 80 in 2021, and hers is an autobiographical story that needed telling. She does not wax eloquent about aging, “[G]etting older is a hideous experience. I’m not one who believes old age is a blessing—bollocks . . . I’m glad I only have to do it once.”

Even though she is getting old Margolyes also reminds us that, “I think of myself as in the autumn of my life . . . I like the idea of ripening. . . . [T]he goal of life is to end up wiser . . . kinder, both to yourself and everyone around you . . .”

This Much Is True is an entertaining, sometimes shocking, periodically uncomfortable, but altogether delightful read. And Margolyes keeps her promise, “Well, I can’t please everyone all the time . . . but I promise you the REAL Miriam Margolyes.”