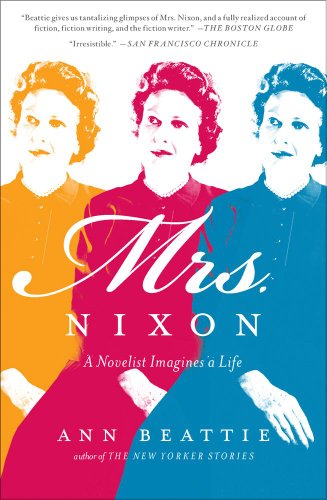 “In moments like this, the reader wishes that Ms. Beattie had managed to play her hat trick and to bring to life, fully and vibrantly, the book that she must have had in her mind and heart. Instead, she gives us Mrs. Nixon, a meditation on writing and a case study on both how to and how not to write.”

It’s very hard to know what to make of Mrs. Nixon, how to assess it as a work by a major talent like novelist/short storywriter Ann Beattie, or, indeed, how to react to it as a work of art.

Except that, safe to say, it is as if the history teacher’s been digging into the costume trunk again. And this time, in hopes of bringing history to life, she has put on a short strawberry blond wig that perches on her head, capping her naturally long, straight hair, sitting slightly askew while her students look on, askance.

Which brings us back to this simple, impossible question: What shall we make of Mrs. Nixon?

In her subtitle, Ms. Beattie reveals a little more information: A Novelist Imagines a Life. At first glance that looks pretty good. And yet, even this leaves the reader to wonder: Isn’t that what novelists always do?

To muddy the waters further, the author shares, right up front, in “A note on the book:”

“I imagine dialogue to which I had no access; I do my best to write as I think my characters would think and speak, based on what I’ve read about them. In some cases, factual events are used only as points of departure, which should become clear those times I write fiction will be recognizable as such.”

But what biographer, to some degree, does not do these things: does not fill in the gaps in their research with supposition? Perhaps Ms. Beattie, given her great gift for fiction, is seeking, in the pages of Mrs. Nixon to create something new, something to sit on the shelf with Truman Capote’s In Cold Blood, and reinvent his great invention, the “nonfiction novel,” with something that perhaps we should call the “fictional biography”?

It is not often that the reader makes it through the whole of a volume, goes back and, in his state of dismayed confusion, reads the majority of it again and still cannot—even with the revolver of a deadline to his head—give either a simple statement of genre or at least a sentence or two description of the book he has just read—and reread. In this case, he can only stare at his feet and scratch his head.

In Mrs. Nixon, both the book and the person, Ann Beattie has taken a cypher and created another cypher about her. In that both Mrs. Nixon and her husband, President Richard Milhous Nixon, who is referred to here simply as RN, were among the least known and least understood of public figures, with the truth of their natures and the motivations behind their actions still completely baffling, it is safe to say that in tackling her project, Ms. Beattie has selected a very compelling topic—one about which her reader would have been happy to come away with any degree of new understanding. Instead, he feels he has come away with a good deal of misplaced information on the art of writing and a sense of confusion when it comes to those poor Nixons.

Why, for instance, in her book about Pat Nixon, does the author feel compelled to tell us this about Anton Chekhov:

“Chekhov seems to write very directly, though his stories don’t hit you over the head with a log; instead, they’re more like persuading the reader to go and gather wood.”?

Very clever, that. A line fraught with meaning that illuminates not only the purpose, but also the means by which Chekhov so successfully wrote. And yet, one cannot help but question its placement here, in these pages, even given the fact that Ms. Beattie has opted to give over a chapter of her book (winningly called Mrs. Nixon, Without Lorgnette) to a consideration of Chekhov’s “The Lady with the Little Dog,” in which she recommends that we should all make sure to give that really wonderful short story a read.

Which we should. It is, after all, a masterpiece. The question is, however, after reading it, should we return to the pages of Mrs. Nixon or just simply move on with our lives?

In writing about Mrs. Nixon, Ann Beattie serves as a puppeteer who is showing us her strings, an artist who wishes to not only demonstrate the means by which she practices her art to us in full view, but also as the writer, who, in bringing this particular project to completion, chooses rather oddly to emphasize her writing process over the subject she has chosen to write about.

The result is something of a meta mess, but not without some errant passages that, sometimes in spite of themselves, create a degree of interest. Most of these occur when Ms. Beattie removes herself and other writers that she admires (Raymond Carver, Edmund White, Joyce Carol Oates, among others) from the narrative and, turns, instead, to her subject at hand.

There is, for instance, a wonderful, quirky chapter on Richard Nixon late in life “adopting” a dog whose need for adoption is in question, while Pat quietly stews over the animal’s intrusive presence. And some bizarre flotsam and jetsam as well, such as “Mrs. Nixon’s Nicknames, Including Her Code Names as First Lady,” a one page list of names, beginning with “Buddy” and ending with “Starlight.”

And there are moments like this one, in which Ms. Beattie allows a moment of humor to creep in, as Pat Nixon surveys some of daughter Tricia’s wedding gifts:

“I’m still recovering from Martha Mitchell’s gift, but when you think about it, it does let you know Martha has some perspective on herself. A gold telephone! Her husband wouldn’t have found it one bit funny.”

By the end of the volume, Ms. Beattie returns to her roots, her gift of character that so enlivens her short fiction. (Indeed, the reader might well be happiest with the book if he were to consider it just another of Ann Beattie’s collections of short stories, some of which sing beautiful songs, while others deliver dour sermons on the art of writing.) In Mrs. Nixon’s Thoughts, Late-Night Walk, San Clemente she allows Pat Nixon to speak (as the does sporadically throughout the book), and, in doing so, allows the reader to come to love her:

“Scarf double-knotted to keep the breeze from blowing my hair. What would be so bad if the wind blew it every which way? Out here on the beach with no one to see me, except my little friend the star. Off it comes, and I don’t believe I hear any gasp from the universe. I’ll put it in my pocket and fold it later when I’m inside, with nothing to do. If he’d come along, would he have remembered when my hair was strawberry blond? Silly Dick told me it was ‘titian-colored.’ He always did see things in his special way. When I worked at the department store, I’d try to show the clothes to their best advantage, daintily turning up a cuff, twirling a wide skirt. I’d put on a necklace so the blouse would get more attention. When a gentleman was buying a lady a blouse, he’d want to know if it should match her eyes and be so surprised if I said it should flatter her skin.
“Did he get down on his knees to get Henry to pray? Can what that book says be true? If I asked Henry, would he—even one in his life—be capable of just answering yes or no?”

In moments like this, the reader wishes that Ms. Beattie had managed to play her hat trick and to bring to life, fully and vibrantly, the book that she must have had in her mind and heart. Instead, she gives us Mrs. Nixon, a meditation on writing and a case study on both how to and how not to write.