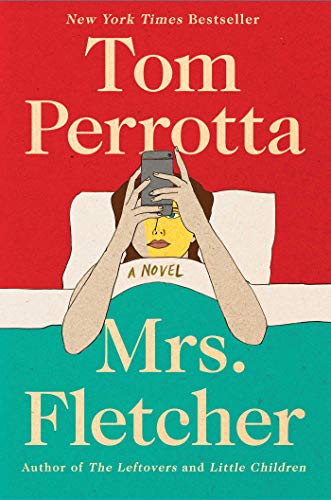 Poor Mrs. Fletcher—car all loaded and ready to take off—cools her heels while her son instructs his suddenly masterful girlfriend to “Suck it, bitch.” Mrs. Fletcher overhears this and wants to give her son a piece of her mind but cannot find the courage, at least not at this point in the book.

As novelist Tom Perrotta writes: “there was always another one . . . The couple on the screen would seem inspired or even blessed . . . and maybe you envied them a little, but you also wanted to thank them for sharing this moment with you, and then that last barrier would crumble, and maybe for a minute or two you’d feel that you were right there with them, like when you heard a good song on the radio and the next thing you knew you were singing along.”

Perrotta’s novel is not only about sex—it’s very specifically about sex in 2017. The PC police, the campus rape culture, gender fluidity—it’s all here. Perrotta even has Eve take a night class at a local college about gender identity, which is where she meets a transgender professor and a class full of open-minded adults.

No one writes better about suburbia than Perrotta, who has an eye for the messy lives hiding just over all those white picket fences. This novel could be a companion piece to his previous book Little Children.

Perrotta’s world is populated by plumbers, soccer coaches turned bartenders, senior citizen workers, and many a disgruntled college graduate trying to eke out a measure of happiness where every lawn is manicured. Nothing is out of place, and yet many are unhappy.

Perrotta is a master at switching points of view so that you come to understand and relate to each character easily. And he doesn’t fall into easy stereotypes. Brendan seems like an out of control frat boy, but there’s more there. Same with Amanda, Eve’s crush. Mrs. Fletcher is a very effective novel, the perfect summer read.