Moving On: A Novel 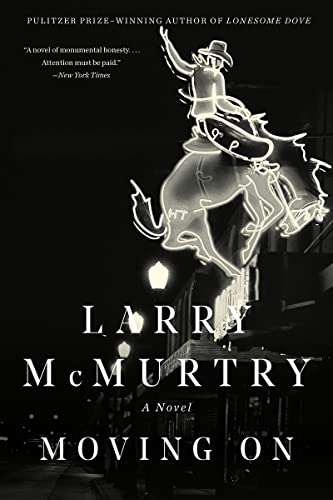 “Moving On goes on and on, but you'll keep reading just the same.”

This edition of Moving On is a reprint of a novel originally published in 1970. It's a book to have along if you get lost on a deserted island or stuck in a polar substation. It's more than 1000 pages with long, long paragraphs that, thankfully, do include punctuation. Because of the robustness of the work, it's next to impossible to give a meaningful summary of the plot in the space provided here.

Actually plot is the wrong word, because there is none. Or hardly any. It's more a detailed journal of a 1960s life, specifically Patsy Carpenter's life, a complicated young woman having affairs and making demands while married to someone she doesn't especially care about.

Patsy's most distinguishing characteristic is that she cries. A lot. Seemingly endlessly. Over everything. And nothing. It's almost like someone asked McMurtry to think of all the ways he could describe a woman crying and put them all into this book.

And suffice it to say, it's an archetypical example of a man writing a woman's point of view. When the book was first released in 1970, McMurtry was lucky he wasn't tarred and feathered and run out of town on a rail by his women readers. He was at a loss to understand their objections back then, and still is today. Here's what McMurtry says now in the preface to Moving On:

"In that simpler era . . . all women cried virtually all the time. The ones I knew were rarely dry-eyed, so it seemed to me that I was only obeying the severe tenets of realism in having Patsy sob through chapter after chapter.

"My editor, Michael Korda, was evidently one of the few people alive in the late sixties whose memory . . . was as precise as mine. He, too, remembered a time not so long ago when virtually all women cried virtually all the time."

Cue the laughter—or if you're a feminist, the outrage. Those comments seem to say more about McMurtry and Korda than they do about the women they knew.

McMurtry's writing, the dialogue, the way he puts words together one after the other in narrative is almost lyrical. He describes everything. Some less appreciative readers might call it filler. But they will see everything, understand everything, feel everything. He captures the core of the moment, and the emotion he describes is so much more than skin deep. It is at least two levels below.

In the following excerpt, Patsy does not just park the car and walk into the motel. She takes you along with her:

"Their motel was called The Old Homestead. Its office was done in imitation logs, with a squirrel rifle hung over the door . . . She circled the office, the swimming pool and kiddy playground, stopped and killed the motor at the door of their room, yawning and stretching her arms back over her head as far as she could. The moment she stopped she was glad she had no farther to go. She considered Jim with a mixture of affection and petulance, and gathered up her purse . . . and his precious cameras, only to have to set them all down at the door of the room in order to find her key. She found it, took the stuff in and dumped it on the bed, got a glass of water, swished some around in her mouth when she was through drinking, and walked back out and across the bare courtyard to stand on the concrete edge of the swimming pool a minute staring at the greenish shimmer of the water. She yawned . . . reached inside the armpit of her dress to scratch what felt like a mosquito bite. Then she strolled back to the Ford to begin the awkward but familiar task of getting her husband awake enough to go to bed."

Here's Jim on a road trip:

"For almost the whole distance to California Jim had the feeling that he was going the wrong way. He had had the feeling before on drives, when he had missed a turn or something and would realize it or suspect it and yet drive on, half knowing he was driving in the wrong direction but never quite sure. There was always a chance that the place he was looking for would appear somewhere ahead."

There's something for everyone in this book. The author includes a wide variety of characters—bull riders, cowboys, a rodeo clown, rodeo stars and rodeo misfits, graduate students, ranchers and wealthy Texans, a hippie sister during the heyday of Haight Ashbury. Readers will get to know these characters better than they know some of their closest loved ones. McMurtry describes every thought, emotion, and action, though action might be misleading because there's hardly any. It moves along, just not at breakneck speed.

It's talky and draggy, but compelling even for readers who are not particularly McMurtry fans. There is something about the depth of detail that will keep them reading if only for the Peeping Tom-ishness of it. It's like watching your neighbors through their windows.

Moving On goes on and on, but you'll keep reading just the same. As one reviewer said, it's a little like turning on the radio and leaving it on for years.