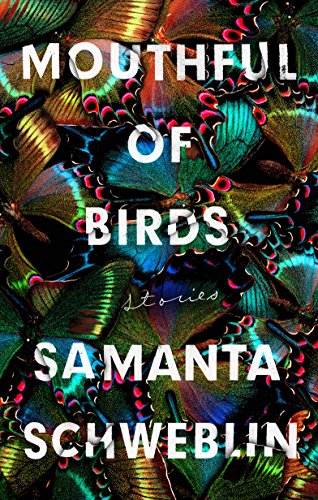 “Schweblin delivers an unadulterated emotional impact—she succeeds, time and time again. And when you finally collect yourself from the emotional bruising, you begin to reflect on what she is really trying to say.”

If there is one word to describe Samanta Schweblin’s writing, it is disorienting. The contents of her first book of stories to be translated into English, Mouthful of Birds, are ample proof of this. A Man Booker International Prize finalist for her novel Fever Dreams, this Argentinian writer’s imagination is nothing short of breathtaking, but like a desperate gasp, it is at times also painful.

Schweblin’s writing is spare and direct. Each word is clear and crisp. So one begins reading each story thinking one is on firm ground, but at a given point, sometimes right away, sometimes only at the end, the world her characters are living in turns unfamiliar, even eerie, and at times horrifying.

Her stories are not dystopian. There is no oppressive society crushing her protagonists. Rather her stories are phantasmagorical—they bend norms of time and space to the breaking point. Often magical forces seem to be at work, yet Schweblin does not attempt to define or explain them. The reader must accept them at face value.

A new bride is abandoned by her husband at the side of the road and finds there are other brides there, too. A father crushes a butterfly at his daughter’s school. A girl eats live birds. Santa Claus sleeps over with another man’s wife. A painter only paints portraits of people smashing their heads onto concrete. A man has to prove himself to an employer by killing a dog with a shovel. A group of men is held in pleasant captivity at a railway station in the middle of nowhere. A man kills his wife and stuffs her into a suitcase.

To many, Schweblin’s stories might bear a resemblance to those of that other Argentine, Jorge Luis Borges. But that is misleading. Borges was a very cerebral writer. She herself has said that Borges was an influence, albeit only an intellectual one. Schweblin, on the other hand, is visceral—she is going for the gut.

Most of all Schweblin delivers an unadulterated emotional impact—she succeeds, time and time again. And when you finally collect yourself from the emotional bruising, you begin to reflect on what she is really trying to say.

It often seems like she is pushing the reader to an extreme in order to gain better understanding of what is normal. Is a child as fragile as a butterfly? Does the spark go out of life when one’s partner dies? If a dead body in a suitcase is art, then what is art? How does a depressed person see the world? Food for thought at the very least.

Some of the stories are intimate glimpses into facets of love, between father and son, between spouses, siblings. Little observations with deep echoes. Other stories seem to be there just to roil emotions, push buttons—to upset the reader without explaining why. To make the reader more emotionally aware.

You want to challenge yourself? Read Samanta Schweblin. But be forewarned: You won’t emerge unscathed.