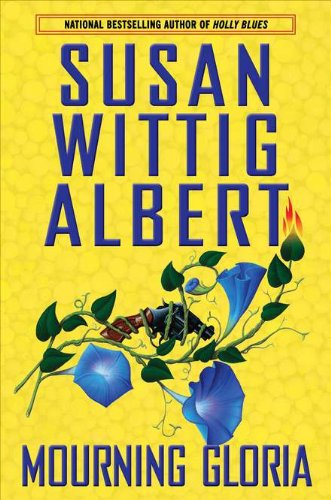 Mourning Gloria is the 19th book in Susan Wittig Albert’s China Bayles series. As with all her books, Ms. Albert has chosen an herb to highlight. Here it’s really more of a spectrum of herbs: those that alter one’s mood. The title is a play on the blue-trumpeted morning glory, the seeds of which the Aztecs used in rituals for their LSD-like effects of inducing a dreamy state of heightened sensitivity to light and sound. But the usual interesting information about herbs is in the middle of a haphazard mystery.

It’s June in Pecan Springs, the Texas hill town where China operates her herb shop Thyme and Seasons. Vinca, marigolds and zinnias spill out of the wooden half barrels downtown and the Farmers’ Market is in the first full year of operation. Beside the organically grown lettuces and bok choy, booths sell figs strawberries and fresh eggs. The market is also selling a locally written book on the small-farm, sustainable foods, eat locally movement—for what better place to show everything off? It’s a typically good opening, but it’s the last stretch of a coherent writing in the book.

The plotline about the local foods movement collapses. There’s a Lothario at the local college campus, and possible illegal drug use that ends up as an arson homicide. Seeing the victim perish may haunt China, but having the victim shot and burned is hyperbole.

There’s also a surplus of young women characters, making the tale unnecessarily difficult to follow. In the prologue a young woman presumably comes to a bad end, then we meet a go-getter reporter straining to make a name for her self. Another characters’ sister, recently out of prison, is missing.

Yet another woman, China’s neighbor who owns a kennel, puts in an appearance. It’s hard to care about any one, as the characters are lightly drawn, making them feel like straw dummies about to be knocked down. And the young women seem disposable, no one seems to care about where they are, and the authorities seem indifferent. If no one in the book cares, why should the reader?

When the killer is unmasked it’s more a HUH? than an AHA! moment. The ending feels both rushed and drawn-out, as a hostage situation develops, but by then readers don’t care how it turns out. Better to traipse off for an Irish coffee and a smoke.