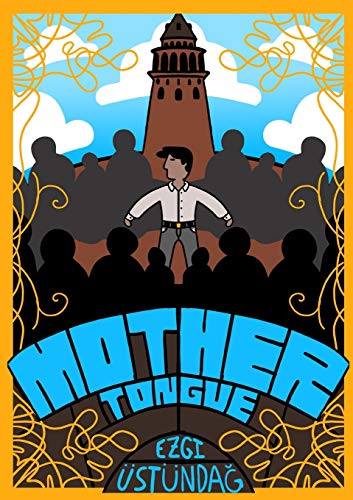 “Mother Tongue is a slim volume of less than 100 pages, but any reader making a small investment in time will reap a windfall return of reading pleasure.”

“Erdem Çeliktaş, a writer of some notoriety in his native Turkey, woke up to find himself transformed into a monolingual English speaker. This realization was neither instantaneous nor immediately horrifying. But, as Erdem would recognize when his editor Berfin called, his new condition would be an inconvenience.”

Thus begins a delightful tale of a writer confronted with a looming deadline, an incomplete manuscript spread over a stack of yellow legal pads, their crinkly and smudged pages covered in handwriting he can no longer read, a wife, daughter, mother and ultimately an entire culture and history he can no longer understand. Fittingly, his first word in English upon waking up is involuntary, unsatisfying, and vulgar, “Fuck.”

The story romps through a series of setting and events, some are logical and to be expected, such as a visit to the neurologist, the publisher’s office, and so on, but most are unexpected and engaging: a small island village, his ancestral home, an English-speaking University in Turkey, and a New York literary agent’s office.

The story has its roots in recent Turkish political history, the Gezi Park riots of 2013, a popular uprising that was crushed by the Erdogan Government, and it was a collection of short stories written by the protagonist about the event that brought him to international acclaim, a book tour of the US, and great  expectations for his next work, this time a novel—presumably the Turkish analog of “the Great American Novel.”

However, Erdem’s highly anticipated “Great Turkish Novel” is incomplete, with half of it written in Turkish on yellow legal pads which Erdem can no longer read.  The rest he is forced to write in English, to be translated into Turkish by his editor, Berfin, a passionate, driven, 20-something, Type-A character. She is a very strong presence in the narrative, and the story alternates between her and the protagonist, Erdem.

Berfin is also a pivotal character since she articulates the dilemma at the core of the story: it turns out that now that Erdem can only speak, and write, in English, she informs him that “the characters don’t sound Turkish anymore.” This presents a problem since it’s not possible to write “The Great Turkish Novel" if it doesn’t sound Turkish.

In one laughable incident, Erdem is asked for his name at a coffee shop so he could be called when his order was ready; however, when he realizes he can’t quite pronounce his Turkish name anymore, he tries to think of “a bland, easy-for-Anglo-Americans to pronounce name” and introduces himself as an American named “Eric.”

There’s an artful admixture of Turkish and English in the book which, while sometimes confusing, is more often mystifying and charming since it not only arouses curiosity to pull the reader deeper into the story, but also enables the reader to at least partially experience the confusion and isolation that the protagonist is feeling.

On almost every page there’s a Turkish word or phrase written in an alphabet that is at once familiar and common to an English speaker and yet simultaneously exotic and alien. It’s a very effective literary device to help the reader empathize with the character, and share the experience of a writer who “had lost his words, the words that had made him a writer.”

Mother Tongue is a slim volume of less than 100 pages, but any reader making a small investment in time will reap a windfall return of reading pleasure.