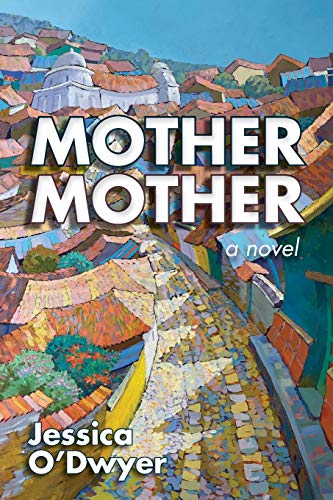 With everything going on in our world these days, chances are you’ve not thought much about the many difficult issues surrounding adoption. But that’s the territory writer Jessica O’Dwyer has staked out for herself. It is part of her makeup as she is the mother two children adopted from Guatemala and, as such, has a lot of experience exploring these issues from personal experience.

Her first book was the page-turning memoir Mamalita about her journey to adopt her two children. With Mother Mother, she’s turned her real-life experience into a novel.

This is the story of Julie Cowan, an upper middle class married woman from the San Francisco area who works in a small, prestigious art museum. She is invested in her career but desperately wants to be a mother and, after too many failed attempts with husband Mark, they decide to adopt.

And so begins the adoption merry-go-round, and O’Dwyer is an expert at cataloguing its heartbreaking twists and turns. Guatemala was a hotbed of adoptions for many years until the government there, realizing that perhaps many of the babies were being stolen, shut it down. Julie and Mark are trying to adopt a child during the period where the last of such adoptions are permitted and find themselves racing the calendar.

The couple is not alone and, along the way, they meet and bond with many American parents who are going through the circuitous process with many of the same emotions. No two cases, it seems, are ever exactly alike.

The Cowans’ first attempt fails, and it would make many couples turn elsewhere, but Julie and Mark carry on. Their second adoption attempt turns up a little boy named Juan whom they fall in love with. They are able to visit him in person at a central Guatemalan hotel where all the adoptive parents stay.

They buy him gifts, play with him, and do the best they can while cooped up in the hotel. The process takes years and just when it seems the legal machinations are about to go their way, Juan is transferred from a foster family to a large orphanage. It seems he might slip from their fingers but somehow, Julie and Marc are able to adopt him legally.

All the while, Julie wonders about the mother who gave Juan up. Why did she do it? Is it possible that Juan was taken from her?

This is where O’Dwyer uses a storytelling device that elevates Mother Mother. The author doesn’t merely have Julie and the reader imagine what happened. She switches gears to tell the story of how Juan came to fall into the adoption process, and it is a harrowing tale. Suffice it to say that Guatemala was, during much of its recent history, a very violent country. Its citizens are still poor and ripe for abuse.

While the book regularly delves into Juan’s ancestry, it is principally concerned with Julie’s life and how she and Marc adapt to the new child in their home. Julie Cowan recalls one of the posts another adoptive mother had written: “Our kids come with a long, slow on-ramp. Nothing happens quickly. You’ll lose friends and be alienated. . . .”

Julie finds herself feeling more and more alienated from her sister who gets pregnant very easily and seems oblivious to the tone-deaf advice she dispenses to Julie. But the toughest adjustment Julie must make is to the small boy himself.

Life is so different from Guatemala in the middle-class Cowan house that it might as well be Mars. Juan cannot conceive that Julie’s husband Mark is not just a visitor. The boy asks when the visitor will be leaving and Julie at first doesn’t understand who he means. When it dawns on her, she explains.

“Mark lives here too. He’s your dad.”
She paused to let the information sink in, then point to herself. “I’m your mom. Mommy.”

But episodes like those seem mild compared to what’s to come. Upon going to a mostly all-white school, Juan decides he wants to be called Jack and begins acting out, physically threatening Julie’s safety. He drags his fingernails across her face and attacks her with a hammer. Someone suggest Julie should send him back.

As Julie adjusts, she meets another mother who does just that. This other parent has adopted two girls from Haiti after giving birth to two sons. When one of those sons becomes sexually interested in one of the adopted girls, the mother sends the girls to another adoptive family.

It’s a heart-wrenching decision, but Julie clearly sees echoes of her own situation in that family. She decides the answer is to embrace more Guatemalan culture but, at this point, Mark is clearly no long a supporter. Mark, who up to this point has been a willing participant in Juan/Jack’s adoption, sets off on his own journey, meeting a younger woman who becomes pregnant with Mark’s child.

Author O’Dwyer shows time and again that adoption is not for the faint-hearted. Her sister may not understand and husband Mark might quit but for Julie, adoption and Juan/Jack’s well-being is all-consuming and soon, she’s off on a return trip to Guatemala where, in a twist that is conceivable though somewhat unlikely, Julie comes face to face with Juan/Jack’s biological mother Rosalba. By then, the reader is only too familiar with how and why the poor mother gave up her son.

Rosalba’s story provides insight into what the adoption process is like for the biological mothers of Guatemala who are almost too young and uneducated to know what is happening to them.

The reader can see what the mothers experience from each other’s perspectives. O’Dwyer does a compelling job of juxtaposing the adoption experience in a way that is rarely done. And will Julie have the nerve to reveal to Rosalba that her lost son is the boy Julie now calls Jack? The book seems to beg the reader for an answer to the question: What would you do?