Mother for Dinner: A Novel 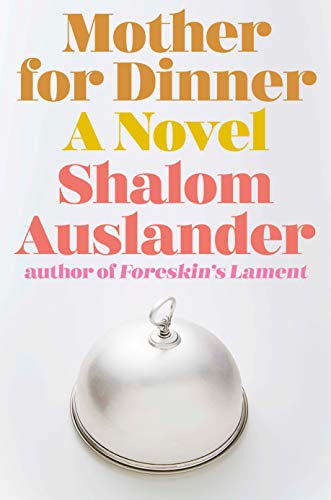 “Mother for Dinner is a deeply uncomfortable novel. At times, it’s funny. At others, it’s a too-accurate examination of family ties. It’s also. . . about eating human flesh . . . It’s not a book for readers with thin skins or weak stomachs, but it is genuinely engaging, and fans of Auslander who can suppress their gag reflexes will likely enjoy it.”

Shalom Auslander’s reputation was built on a pair of books: Beware of God (2005), a short story collection that wryly skewered and otherwise satirized the terror of the divine; and Foreskin’s Lament (2007), his memoir of growing up in an insular and sometimes abusive Orthodox Jewish family. Mother for Dinner, Auslander’s fourth book and second novel, combines these threads into an uncomfortable, sometimes funny satire of hybrid identities and family dynamics.

Protagonist Seventh Seltzer works in publishing, exclusively dealing with the “Not-So-Great Something-American novel.” He’s increasingly irritated by “the larger problem with which he had struggled his entire life: identity.” The layers of identity (race, nationality, sexuality, gender, disability, class, religion) are reduced here to hybrid commodities for publishing to issue forth, and for critics to praise as necessary representation, regardless of the fact that “they’re terrible.”

Seventh constantly seeks to escape from his own identity, Cannibal American. He comes from a family of eaters of the dead. Cannibals are endlessly persecuted and racially ambiguous, forever passing as whatever not-quite-white identity is most convenient. Seventh tells his lovers that he matches them: “‘Black?’ he’d said to Jada, a Pro-Choice-Liberal-Democratic-Baptist-African-American-Dominatrix. ‘Of course I’m black.’

“‘Jewish?’ he’d said to Leah, a Pro-War-Orthodox-Neoconservative-Zionist-Jewish-American-Nymphomaniac. ‘I’m as Jewish as they come.’”

In Mother for Dinner, identities are arbitrary labels that tell you nothing about the characters and are infinitely interchangeable. It’s clearly meant as a satire of the ways in which race is a social construct, but Auslander avoids the fact that race (among other identities) is a lived reality, and plays the scene only as absurd.

This is the book’s weakness. The Cannibals are at best questionable satire of identity politics, and Auslander frequently appears to dismiss people’s actual lived experiences as arbitrary currencies used in social interactions.

The book’s strength is Auslander’s deft hand with toxic family relationships. Matriarch Mudd is dying, and her last demand of her children is that they carry on their mostly abandoned cultural practices by eating her body. In return, they can divide among themselves the value of a three-storey Brooklyn brownstone, wealth beyond any of their current means.

Among the siblings, as guide and enforcer, is “Unclish,” their father’s brother and apparent high priest of the Cannibal religion/culture. Unclish is ancient to the point of incoherence. He taught the children in their youth, but none of them have a stable recall of the crucial tenets. Rules and customs, family history, and even crucial events only a generation or two past are all changeable. Misunderstandings rule at every turn.

Below all this is a greater uncertainty as to whether Cannibals actually exist as a culture, or whether the whole thing is an elaborate construction by their family only. The “old country” can’t be named. No plans come to fruition. Celebrities the family “knows” are Cannibal (cultural, not in practice) and all fail to assert their own identities. Ronald Regan is a failure in their eyes. Jack Nicholson, who accepts his Oscar without naming his people, is the greatest disappointment of the age.

Is any of this real? The suspicion that this is a fantasy, that no one has ever actually been eaten, weighs against the rapidly cooling and decomposing corpse that Mudd leaves behind. Morbidly obese and intimately familiar, she must be drained of blood, dismembered properly (the guidebook for this is disguised as a deer hunting manual), cooked, and eaten. It must happen now.

Auslander pursues the conceit through its grotesque stages, and, more movingly, explores Seventh as he moves psychologically from full rejection of his past and identity to passionate defender and advocate. He was assigned, in childhood, to write the Great Cannibal-American Novel, and he knows exactly how such a novel should go. Only his own cynicism prevents it, and that cynicism is fading rapidly in the face of manic religious devotion.

Mother for Dinner is a deeply uncomfortable novel. At times, it’s funny. At others, it’s a too-accurate examination of family ties. It’s also, very directly, a book about eating human flesh, and everything that might entail. It’s not a book for readers with thin skins or weak stomachs, but it is genuinely engaging, and fans of Auslander who can suppress their gag reflexes will likely enjoy it.