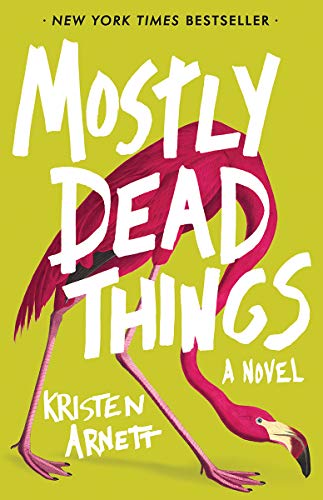 “What is most remarkable about Mostly Dead Things is that, despite the mishaps and travails of the Morton family, the novel is ultimately both highly entertaining and inspiring, as uplifting as it is original.”

In the publishing industry, one often speaks of “comp” titles—books similar to the title one is pitching or marketing that may offer prospective editors a comparative point of reference. So almost inevitably, Kristen Arnett’s debut novel, Mostly Dead Things, will be compared to other contemporary works that explore the idiosyncrasies and eccentricities of Floridians, including Karen Russell’s Swamplandia! and Lauren Groff’s Florida. Do not be fooled. If you read from now until the Sunshine State sinks into the ocean, you will never come across another novel even remotely like Arnett’s madcap, poignant tale of romance and taxidermy.

Here is what you will find inside: a stuffed buffalo decked out in bondage gear; peacock kidnappings; peacock murders; a brother and sister competing for and then sharing the same childhood sweetheart; arson; teenage pregnancy; an abandoned Christian historical museum; tender words about roadkill; suicide; adultery; legless female elk wearing nipple clamps; and a delicate love scene that revolves around the destruction of a cicada shell. Only an artist of the highest order could sew these diffuse elements into the moving, resonant and persuasively lifelike animal that is Mostly Dead Things.

The novel recounts the tribulations of the Jessa-Lynn Morton, a third-generation taxidermist in small-town Florida, as she struggles to keep her family together and its shop afloat after her father kills himself in his workshop.

Complicating matters, her brother’s wife, Brynn, who is also Jessa-Lynn’s semi-secret lover, has abandoned her two children with the Morton clan and run off to Boca Raton with a stranger. From the outset, Arnett defies convention. Both of these events, central to the plot, occur before the chronological start of the novel. This choice is a brave one—and one that ultimately bears fruit, allowing readers to focus their sympathies upon those who remain behind.

Jessa-Lynn is far from a conventional storybook heroine. Brynn describes her lover affectionately as “a little mole,” while Jessa-Lynn conceives of herself as “an oak, a sturdy base with wide hips and thick thighs, my ass not large enough to compensate for the round, doughy bowl of my stomach.” She takes comfort in believing that “the universe had organized [her] shape into what it would be most useful for: standing upright for hours, bending over carcasses.”

In one of the novel’s most touching passages, Jenna-Lynn ruminates upon her own limitations: “I’d never seen snow once in my life. That seemed very sad to me. I’d never traveled anywhere, or seen anything. Never left the United States. I didn’t even own a passport.” Yet Jessa-Lynn is a woman of deep insight and understanding. Like Henry David Thoreau, who famously wrote that he had “traveled a great deal in Concord,” her distinctive and deep humanity allows her to develop a rich, compelling inner life despite her restrictive surroundings.

The contrast between Jessa-Lynn’s approach to intimacy, and that of her brother, Milo, adds a philosophical tenor to a storyline that is otherwise driven by clever plot twists and vivid emotional revelations. From early in life, Jessa-Lynn has anticipated abandonment, vacillating between fear and acceptance. “Everything,” she reflects, “grew up and flew away.”

Part of her is relieved that her lover marries Milo, because this traps Brynn in their small town and allows their own romance to continue—at least, for a time. “Love,” to Jessa-Lynn, “was a punch in the gut that ruptured your spleen. Love was a broken telephone that refused to dial out.”

In contrast, Milo—initially far more naïve—imagines love to be a “magical incantation.” When he proposes, he trusts in the power of the word itself: “Say the word love and it’s there for you; say the word love and the other person feels it too.” Later, Jessa-Lynn reflects, “What I should have told him that day: love makes you an open wound, susceptible to infection.”

She also recognizes that love is “a thing that need[s] constant care,” while Milo appears to believe that the pledge itself will engender future happiness. The siblings’ mutual evolution, at the heart of the novel, is both dramatic and deeply authentic.

The rest of the Mortons also prove an enticing, unforgettable crew. Jessa-Lynn’s mother, in her widowhood, endeavors to create exhibits that connect domestic life, taxidermy and sado-masochism. Her nephew, Bastien, acquires live specimens illegally on the black market. Her niece, with whom she trades menstruation stories like fishing yarns, fears capybaras. They live in a world of suppression and secrecy, where “home and safety [are] not synonymous.”

Underlying all of this drama is an obsession with preserving the bygone. This “taste for nostalgia” is Jenna’s inheritance from her father, “a man who sincerely loved looking backwards, as if the past were a place he could visit any time he wished.” The Mortons—unlike Brynn—cannot escape from their poky universe of fox pelts and ocelot claws. Of her family, Jessa-Lynn observes, “we couldn’t ever leave roadkill behind. Something inside us always made us stop to pick up dead things.”

It is fitting that the Mortons cling to the past, because Mostly Dead Things is a subtle but powerful homage to “old Florida.” Not the “old Florida” of citrus barons and color lines, but a quirky, self-sufficient world that has slowly been supplanted by the wilder, angrier, more polarized realm of hanging chads and theme parks. Jenna-Lynn is very conscious of this divide. In describing a visit to a new art gallery that has recently opened, where the proprietor, Lucinda, will soon seduce her, she writes:

“It was weird outside in that part of town. It didn’t feel like old Florida. The sidewalk had been power-washed into submission and no plant life remained, aside from a row of very small cacti set in the gravel that trimmed the edge of the building. . . . Inside was a solid thirty degrees colder than out on the pavement. . . .”

Arnett possesses an extraordinary gift for language, an ear for the perfect turn of phrase. When Jessa-Lynn accidentally topples “a rack of miniature lacquered animal skulls,” she observes that “[a] few of them broke, dislodging teeth that scattered across the floor like uncooked rice.” And speaking of Brynn to her brother “felt like chewing tinfoil.”

After Jessa-Lynn persuades the local drycleaner to remove ashes from a bear skin rug—following some of the most dryly comedic dialogue one will ever encounter—she leaves him “fondling it, checking the teeth like a dental hygienist performing a cleaning.”

What is most remarkable about Mostly Dead Things is that, despite the mishaps and travails of the Morton family, the novel is ultimately both highly entertaining and inspiring, as uplifting as it is original. If “comps” are necessary, they should be to the great comedians of manners: Henry Fielding, Jane Austen, E. M. Forster. Of course, the manners are somewhat different when one mounts exotic fauna for a living, but that only adds to the fun.