Most of Me: Surviving My Medical Meltdown 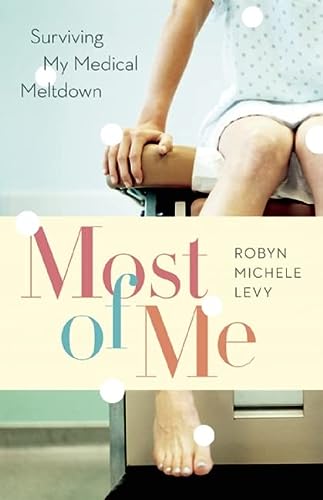 Most of Me would be a hilarious book if it were not for the serious nature of the author’s illnesses. Yet one cannot help but smile and say, “You go, girl!” while reading the humorous ways Robyn Michele Levy handles her ordeals.

Robyn Levy was diagnosed with Parkinson’s disease at age 43. Eight months later, she got a second devastating diagnosis; this time it was breast cancer.

Most of Me is an ongoing sequential record of the author’s early mysterious symptoms of a dragging left foot, a frozen left hand, and a crash into “downward dead dog” position on the yoga mat and the devastating diagnosis of Parkinson’s disease that follows.

Ms. Levy then describes her discovery of two lumps in her breast followed by a mastectomy and oophorectomy, after which she finds that there is no ovary fairy, and finally allows the reader to become privy to her sometimes feeble and more often funny attempts to deal with her diverse disease portfolio.

The author discusses her marriage to Bergen—an “older man” (by three years)—in dog years, then goes on to explain if you multiply that number by seven you will find their real age difference in human years. Throughout the entire book this sort of humor is applied to both the mundane and the serious.

On her journey from health to acceptance of her present circumstances, Ms. Levy creates a diverse cast of characters to accompany her by naming each affected part of her life and limb. Her Cry Lady perhaps is the most prominent as she emerges at most inopportune moments; her breast prosthesis becomes Dolores the Prosthesis; party games emerge during neurologist visits in the form of trying to move the patient’s rigid left arm or making the patient lose her balance but catching her before she falls; the party is over when she gets a prescription instead of a grab bag.

The above examples may be seen by some readers as a form of sick humor. And it is. And why not? It is both heartbreaking and hilarious to witness a person with a creative mind attempting to use the dual powers of humor and fantasy to ease her pain and restore her ailing body to a healthier state.

Ms. Levy spends a lot of time describing the support she receives from her husband and teenage daughter as well as her many friends from all over Canada. Her medical support team also sounds ideal. This, together with her sense of humor, makes Most of Me: Surviving My Medical Meltdown an interesting read.

The biggest problem with Most of Me is that the author’s approach is unrealistic for the average woman who might find herself in similar circumstances. Quite often, family support is not so readily found, the friends are not so numerous and attentive, and the medical situation is less than ideal. The book is well written and interesting, but a reader looking for help and support in accepting a personal diagnosis should read between the lines beyond the fear and devastation to relate to and even enjoy the positive aspects of her experience—perhaps even employ some of her techniques. Some professionals may wish to be selective in recommending the book to certain of their patients, depending on that patient’s emotional status and general circumstances.

In the final analysis, Ms. Levy has written a fast read giving valuable insight into the progression of both Parkinson’s disease and breast cancer from the patient’s point of view. Most of Me is heartily recommended for readers seeking general information and a light touch.

Lois Bennett, Ph.D. is a former psychologist turned editor and writer, author of Beyond Forever: Experiences from Past Lives, written under the pseudonym of Taylor Shaye (Fireside Publications) and the ebooks Deadly Visions and Death Tales. She is best known for her nonfiction book Essays on Living with Alzheimer’s Disease: The First Twelve Months and is currently working on a follow-up work of nonfiction detailing existence in a world of diminishing awareness.