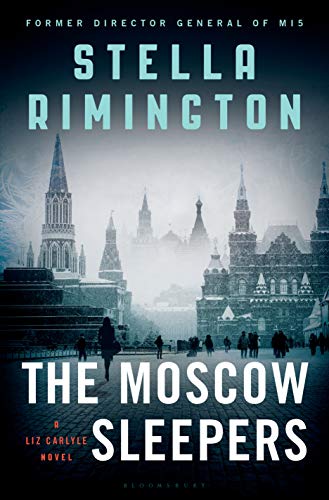 “The Moscow Sleepers offers a sturdy display of espionage agencies wrestling to collaborate via real-life intrigue, with a nice dose of feminine teamwork.”

What if ordinary universities in America are already hosting “sleeper” agents and networks, awaiting a signal from Moscow or Beijing to activate and demolish democracy? All too possible, this concern leaps to life in the newest book from former MI5 director Stella Rimington, The Moscow Sleepers. Grimly real (as American elections already show), the threat of international meddling confronts all democracies that depend on freedom of speech and universal voting.

As The Moscow Sleepers opens, a professor’s murder in a Vermont hospital provides the first clue that such a plan could be in place. Around the same time, a postcard message alerts Liz Carlyle, working at a high level within MI5—Britain’s Security Service, addressing threats inside the UK—that a former collaborator in Moscow wants a face-to-face meeting in Berlin. MI5 would have to alert its international-operations counterpart, MI6, for this kind of outreach. Will Liz be able to control the connection safely if she complicates it in this way?

Rimington provides straightforward espionage activity, without much distraction of character issues. (Liz is lonely, and responds differently in some situations as a result, but not in any way that could jeopardize the action.) In a delightful way, she reveals Liz Carlyle’s alliance with the junior MI5-er whom Liz has mentored, Peggy Kinsolving, and the utility of that alliance in navigating a male-heavy hierarchy. “Lean in” is looking good for these women at headquarters, as well as in the field.

And the field is where Liz will have to go, to respond to outreach from that Moscow field agent. Of course, MI6 will send its own agent, the deft and adept Bruno Mackay, but it’s Liz and Peggy who will find the threads that tie together the murder in Vermont, the agitated spy reaching out, and an odd and sinister boarding school in the English countryside where tech-brained immigrants are led unwittingly to become expert hackers.

To grasp the import of that last strand, Liz reconnects with Chief Constable Richard Pearson:

“‘I’d better warn you it’s business,’ said Liz, and she heard Pearson sigh. ‘Well, only partly,’ she added. ‘Something’s come up in an investigation that seems to connect to a college in your patch. I don’t suppose you’ve ever heard of it. It’s a sixth-form college about ten miles west of Southwold called Bartholomew Manor.’

There was a pause, then Pearson said, ‘Now, that is really interesting. I don’t think it can be a coincidence. This college has crossed our radar here, and just a few days ago. I’d love to know what your interest in it is—if you can tell me.’”

Rimington’s writing rarely ramps up high suspense, even though one of the youths at the school is in peril; instead, she unspools a web of interconnection, with ramifications in The Moscow Sleepers that resonate with daily news in today’s perilous reality. Neatly plotted but without angst among the characters, the book offers an insightful look at what today’s Security Services really worry about, and how they cope in their half-lit theatre of action.

Looking for the page-turning risks of a Joseph Finder or John Le Carré book? Don’t pick up Rimington. Instead, The Moscow Sleepers offers a sturdy display of espionage agencies wrestling to collaborate via real-life intrigue, with a nice dose of feminine teamwork. It’s a good, if quiet, read, and may yield a better dose of the real thing than most other espionage novels today.