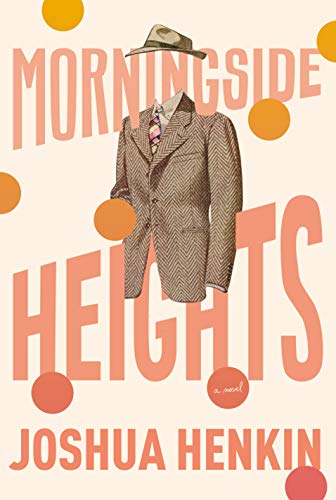 Life is full of contradictions and paradoxes, and the course on which one sets out almost always leads to an unintended destination, lessons that are on full display in Joshua Henkin’s new novel Morningside Heights.

When Pru Steiner, raised in an Orthodox Jewish household outside of Columbus, Ohio, goes off to college in the early 1970s, she expects to abandon the strictures of her religious education. Instead, she clings to them, finding comfort in the familiar. Moving to New York after graduation, she plans to turn her undergraduate theater experience into a career, but soon pivots to a doctoral program in English literature. Falling in love with her professor and getting married isn’t in her plans either, but that soon happens and derails her studies.

The professor, Spence Robin, is a rising star at Columbia, a popular Shakespeare scholar who has already experienced one major shift in his life—leaving a failed marriage that had produced, unintentionally, a son. The son, Arlo, the most changeable character in a novel about change, moves back and forth between his father and his unstable mother, struggling to overcome dyslexia, and dropping his medical school plans in favor of high-tech entrepreneurism.

Spence’s sister, Enid, occupying the book’s periphery, has also seen her life plans change, when, as a teenager, she suffered a brain injury in an accident that left her unable to care for herself. In contrast, there’s Sarah, the daughter of Spence and Pru, who sets her sights on becoming a doctor and, alone among the book’s main characters, doesn’t waver.

What causes change? As Pru feels her adherence to her religious practices fall away, she asks herself: “When did she start to slip? Was it simply that Spence let her do what she wanted, that if she’d had more opposition she’d have remained steadfast? Was it that her father died, and she was waking up early to say Kaddish for him? Day after day, Kaddish after Kaddish: before long she was all Kaddished out.” She wonders if it is the need to break from routine that causes change, but the book suggests that there’s something more going on.

For the most part, the changes in direction are handled without anguish or melodrama. Instead of finishing her doctorate, Pru takes a fundraising job at Barnard College, and she seems only slightly upset about it. “She told herself she was supporting Barnard, supporting the free flow of ideas, but the pitch letter she’d written, the prospective donor she’d taken to lunch: it all made her feel vaguely ashamed.”

Arlo comes and goes in Spence’s life, but Spence takes it all in stride. Arlo does dwell on the distance he feels between himself and both of his parents, however, and worries that Spence isn’t interested in him. This perhaps contributes to his zig-zagging career choices, but his angst never takes on traumatic proportions. He disappears for years at a time, without much in the way of consequences. At one point he moves to Asia, but when he returns it’s almost as if no one noticed he was gone. This matter-of-factness does suggest that change is inevitable and permanent. And it’s likely he’s learned this from his mother, who moves him from one situation to another, including a sudden departure from a commune where they’ve lived for three years. “One day, when Arlo was fifteen, his mother said, ‘We’re leaving the commune. It’s time to move on.’”

The biggest curveball in Pru and Spence’s lives is Spence’s early-onset Alzheimer’s, which Henkin introduces early in the novel through a leap forward in time, followed by sections that alternate between past developments and this new challenge. Spence’s problem begins to dawn on Pru when Spence is unable to make progress on a book he’s supposed to be writing. She calls Sarah home from medical school to help shepherd Spence through the diagnostic tests. With that accomplished, and their lives turned upside down, the family still doesn’t fall apart. As with everything else that has come their way, they take the necessary steps to deal with it. Pru hires a woman originally from Jamaica to help with Spence, and Ginny becomes another member of the family, bringing along her own vicissitudes.

It is this struggle with Alzheimer’s that forms the emotional heart of this novel, which is, mostly, about ordinary—if ever-changing—domestic affairs. Coming to terms with Spence’s decline, the greatest of all changes, is the challenge the characters face, and that many of us will face as well: “If Pru had shown the old Spence what the new Spence was like, the old Spence would have been horrified.”

But, of course, he can’t see it, this ultimate, saddest, last change.