From Morning to Night 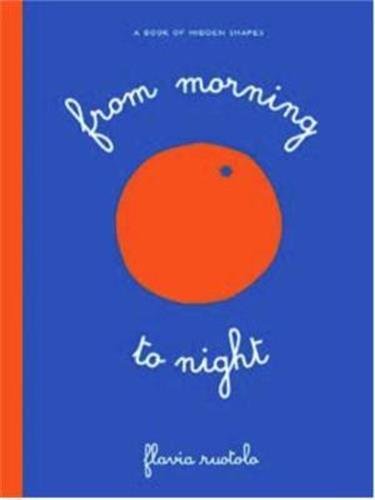 From Morning to Night is an English translation of a recently published French edition. With a background in design, which she has applied to multiple mediums, Ruotolo has created a crisp and attractive picture book project.

The concept here could not be more simple. Two complimentary colors are effectively applied to manipulate pictures from one orientation to another. On the one hand an object is a gift wrapped in paper and tied with a bow. On the other hand the object could be turned into a music box with a windup key. The two objects are presented on facing spreads to invite visual comparison with the shapes and colors.

The 16 pairs of objects are unique and random and do not lend themselves to any storytelling beyond what the reader surmises. While visually the objects relate, categorically they do not. Other than imagination, there are few common threads connecting an orange colored orange to a blue colored planet, or an orange upright piano to a blue toy robot.

But that is not necessarily a criticism. Developing imagination is what this book is aiming for. Creative thinking and originality are skills that need to be fostered in this four to seven age range and this book certainly does that. It could also be a contender for visual stimulation and language development in even younger kids.