More of You: The Fat Girl's Field Guide to the Modern World 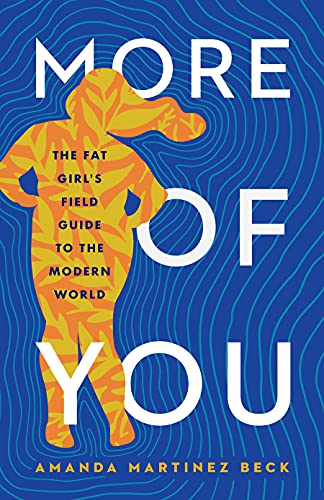 “Beck’s infusion of religion into this book is both its strength and weakness.”

The title More of You sums up the unapologetic message that Amanda Martinez Beck presents in this book and through her work as a fat activist and body peace coach: there’s more of me and many of us and that’s just fine. “More” implies not only being a large woman but also the numerous bounties large women have to offer the world.

This book is “about the relationship we have with our bodies and how that affects us, and how we can walk in the world around us and take up the space we deserve.” Beck’s premise is that all bodies are good bodies—big and small, fat, thin, and in between—and that it’s well past time to stop judging people by their size. Her own political awakening came when she realized that “maybe it wasn’t my body that needed to change but the culture itself.”

Stepping back from the barrage of messages that both higher and lower weight individuals internalize in this culture, Martinez focuses on the importance of body function rather than appearance. For much of her life, she had assumed that her body was meant to be perfect or at least healthy and fit, but she came to see that its purpose is to cultivate “deep and meaningful relationships.” In her case, this means with God as well as “my neighbor as myself.”

Beck is an unabashed Catholic who takes her faith very seriously, especially her relationship with “God through Jesus.” Her infusion of religion into this book is both its strength and weakness, as it will naturally attract readers of a similar religious bent and may even help them make peace with their bodies. On the other hand, there is a fair chance that it will put off secular and less religious readers, which is a shame because Beck has a many useful insights into how to go from body hatred to body acceptance.

For example, her goal is to be a fully integrated person, and this cannot happen if she is divorced from her body and overly engaged in perfecting it to meet arbitrary external standards. By overemphasizing appearance, we increase shame and stifle self-esteem that works against healthy integration. She critiques the self-improvement culture as well as the pressures that women especially feel to look attractive. She sees the health and fitness craze as another example of never being allowed to simply feel fine as you are, and laments that the “body positivity” movement has been co-opted by corporations and social media influencers to make money off (mostly) higher weight women.

Beck writes poignantly of her struggle with and against her body: “All bodies are good bodies . . . My shadows were shame and fear about the size and enoughness of my body and my supposed lack of strong character to make myself smaller.” Now she knows that she doesn’t need to shrink her size to be lovable.

She explains that growing emotionally healthy includes not viewing life in binary, either-or terms, and encourages readers to view their bodies in a neutral, non-moralistic manner. Though she has clearly done a great deal of work to make herself more healthy and whole, her over-focus on bodies being “good” rather than “bad,” however, falls into this exact all-or-nothing, moralistic trap. In fact, eating disorders therapists would contend that such a pre-occupation with good and bad is sadly typical of the irrational thinking of dysregulated, unhealthy eaters with poor body image. Instead, clinicians would guide them away from using words like good, with its religious, moralistic roots, to describe food or bodies.

Beck tackles what we teach our children about their bodies and how to feed them, fatness as a moral issue in society, the history of fat women and the fashion industry, and what weight stigma does to build fear in people of lower weight and tear down esteem of higher weight people. For her, fat “is a neutral descriptor of a large body that often faces personal and systemic prejudice and exclusion.” Because fat women have for so long dealt with the pain of their size alone, in secret and in deep shame, showing them how the personal is political will help them put effort into shaping up our culture to treat them more appropriately.

She explains how diet culture is racist, classist, sexist, ableist, and physically and emotionally harmful, the outcome of moral judgment about body size and shape, the belief that body weight is controllable through eating and exercise, and pure capitalistic greed. Detailing the fat liberation movement in its many iterations, including its origins in patriarchy, she shows how radical, feminist and fat became something not to be ashamed of but to be proud of through the Fat Underground, Fat Liberation Manifesto, Fat Girls Bill of Rights, Fat Studies, and the Health at Every Size (HAES) movement.

The book does an effective job critiquing the diet culture, including its Christian wing, and illuminating how sizeism and weight stigma run rampant in our society, especially in the health and medical professions. Beck explains why diets don’t work and can lead to rebound eating, weight gain, yo-yo dieting, and weight cycling. She also describes how to manage emotional triggers to eating when we’re not hungry. Most importantly, she reminds us that rejecting thin ideals and diet regimes is a bold and radical stance in this culture and that to accept that higher weight women can love themselves is near to heresy.

Each chapter has an entry for the fat lexicon more fully explained in an appendix, a “packing list” for the journey Beck takes the reader on, and a “touchstone” or reminder of what the chapter is about to carry forward. She encourages readers to adopt body neutrality, become curious rather than judgmental, listen to their bodies, mind their self-talk, reject binary thinking, and practice introspection.

If you are a devout Christian woman of size who would enjoy and find value in reading a self-help book replete with frequent mention of God and Jesus and inclusion of scriptural passages, this book will touch your heart and help you heal your body image problems. For the rest of us, there are a great many other (secular) books that will teach higher weight women effective ways to view themselves physically and nourish themselves emotionally.